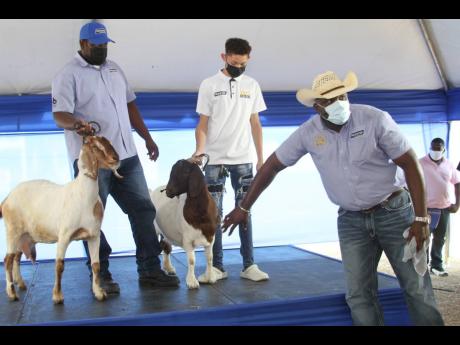 Samuel Golding, owner of Gold Mine Boers International, shares some best practices with members of the small ruminant industry during the GOAT Seminar put on by Nutramix at the Denbigh Agricultural Showground in May Pen, Clarendon, last Wednesday.

Local manufacturer of animal feed Nutramix, in partnership with Gold Mine Boers International, recently hosted a number of players in the agricultural industry at its inaugural GOAT Seminar at the Denbigh Showground.

About 50 small ruminant farmers who specialise in goats and sheep were in attendance for the interactive workshop, which was held to help boost the local production of the sector and educate the farmers.

Nutramix's Senior Manager of Livestock Support, Dr Gabrielle Young, and owner of Gold Mine Boers International, Samuel Golding, captivated the audience of farmers, government officials and industry stakeholders with informative presentations and question-and-answer opportunities on a range of related topics.

Trevor Bernard, president of the Small Ruminants Association of Jamaica, said that "this industry has the potential to employ a lot more people".

Young, pointing out that Jamaica imported $1 billion worth of mutton in 2014, said local production can increase tremendously, especially with the use of artificial insemination (AI), which is the introduction of semen into the female reproductive tract without the use of the male animal itself.

"AI is economical from a standpoint that you can have access to all these beautiful males at a fraction of the cost. Some of these males can cost about US$25,000 to US$50,000. Nobody is going to sell you that, and I wouldn't buy it, because next thing you know he breaks his leg. But guess what? You still have access to his semen at a fraction of the cost. His semen is him," she said.

Young said that it may be prudent for small farmers to focus on areas such as breeding, and later selling, weaner goats (kids) to other farmers or larger players like Nutramix, who can provide security against issues like praedial larceny. Farmers also have the option of rearing their ruminants to full term for meat and milk.