PPV operators not pleased with 15 per cent increase 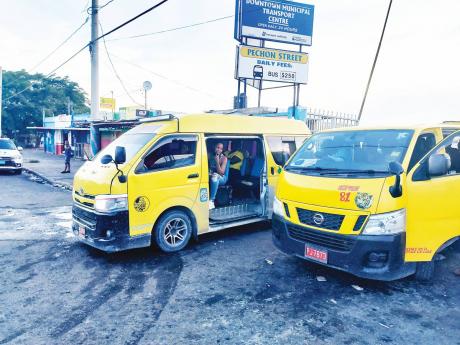 Several taxi and bus operators in the Corporate Area say that they are still not satisfied with the 15 per cent increase in fares, which comes into effect on August 16.

"Gas a raise, everything a raise and fare nah raise. A long time this should happen. It can all go up likkle more too," said Phillip Tucker, a bus operator on the downtown to Waterhouse route.

Another driver, Bernard Smart, who traverses the downtown to Seaview Gardens route, told THE WEEKEND STAR that bus operators have often struggled to collect the full amount which currently stands at $100. He believes that 15 per cent won't make much difference.

"A $100 a bus fare and a baay $50 them pay we. More than half a dem pay that and a say COVID mek dem no have no money. Fifteen per cent only give us a $20 raise and dat no mek much difference," he said. The Transport Ministry, in a release yesterday, said the rate for the elderly, disabled and children will remain 50 per cent of the adult fare.There will be no change to the rate for the Jamaica Urban Transit Company and the Montego Bay Metro. For almost a decade bus and taxi operators have been clamouring for a fare increase.

A conductor, Antsman, believes that the increase will not make a difference.

"A now people ago bawl. Wi never did a get di full $100... me believe say if dem did put like a 50 per cent increase, wi would probably start get $100 from passengers 'cause the fare would raise higher," Antsman said. Taxi operator Colin James, who traverses the downtown to Waltham Park route, said that the fare increase is not sufficient based on the gas prices.

Gas price a raise every week

"Fifteen per cent? Wah good that can do fi we when gas price a raise every week? Dem fi come better than that, enuh," he said. For Kimberly, a passenger who was on a Washington Boulevard taxi, the timing of the fare increase was bad.

"A weh we ago get it from?!" she asked, noting that she has been unemployed for several years and can barely afford the current fare.

The Transport Ministry stated that the fare increase follows several meetings with the Transport Authority and the National Council of Taxi Associations.

The ministry said that it also consulted with the Ministry of Finance and Public Service who indicated that the increase will affect national inflation by approximately one per cent.

The Transport Ministry further warned operators that no additional fares should be charged, stressing that the Transport Authority will be working steadfastly to monitor the situation.