ONE-MINUTE READ ... News from across Jamaica 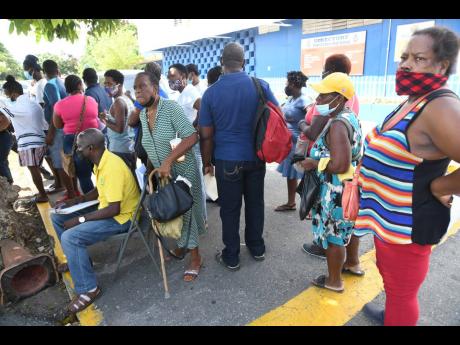 CABBIE SHOT AND KILLED BY COP

A taxi driver was shot and killed and his driver injured after the cab in which they were travelling was fired into by a cop on King Street, downtown Kingston, on Thursday.

According to the Independent Commission of Investigations (INDECOM), the cops reported that four of their members were on motorcycle patrol when a taxi was signalled to stop for a traffic violation.

It is alleged that the driver disobeyed the request and drove off, causing injury to a police officer. It is further reported that the police subsequently fired at the vehicle. It was later discovered that the driver and his passenger were shot. They were taken to the Kingston Public Hospital where the taxi driver died.

The injured police officer was treated and released.

INDECOM has so far requested footage from CCTV cameras in the area as it begins a probe into the incident.

The police said that Thompson was shot and injured in the St Andrew South Police Division on August 15. It is alleged that he gave his name as Andre Thompson when he was taken to hospital. However, early information received by investigators led them to the hospital where Thompson was placed under police guard.

After being discharged, Thompson was pointed out during an identification parade, and was later charged by detectives from the Major Investigations Division with three counts of murder, and illegal possession of firearm.

He was also charged by the Kingston Western police with murder and illegal possession of firearm for the May 26 shooting death of Patrick Dixon on Lincoln Avenue, Kingston.

Investigators assigned to the Mandeville Police Division arrested and charged a man for the May 31 murder of 67-year-old Duwen Wallace, otherwise called 'Jackie Wallace', of Christiana in Manchester.

The police said that on May 30, Wallace and Kennedy were at a bar in the area when Wallace spoke about a quantity of cash that he had. A day later, Wallace's home was ransacked and his body later found with multiple stab wounds.

Kennedy was arrested on August 11 after he was found in possession of a cellular phone owned by Wallace. He was charged with murder on Wednesday.

The Major Organised Crime and Anti-Corruption Agency (MOCA) has added its voice to the call for Jamaicans to get vaccinated in a new social media campaign dubbed 'Trust the Facts, Get the Vax'.

The campaign is aimed at encouraging persons to take advantage of the opportunity to get vaccinated, especially now that at least three of the approved vaccines are available in the island.

According to MOCA's Director General, Colonel Desmond Edwards, the campaign evolved out of the need to help bolster the country's efforts to slow and eventually end the pandemic.

"MOCA is first and foremost a corporate citizen of Jamaica and so we felt it was important for us to lend our voice and the talent of our people to the cause," said Edwards. "We hope that persons will take the encouragement to get the COVID vaccine as soon as they can".