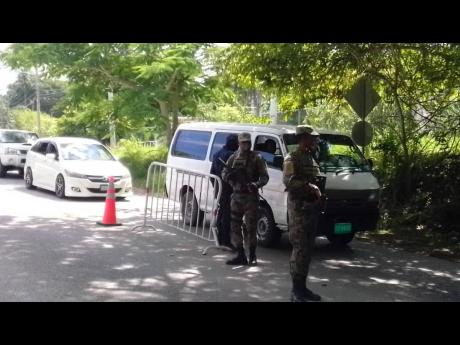 Members of the Jamaica Constabulary Force and the Jamaica Defence Force man a checkpoint.

The security forces have intensified major operations across western Jamaica in light of the recent reduction of the no-movement days.

Over the past days, several joint police/military teams have conducted spot checks along sections of roadways leading from Trelawny into St James, St James leading into Hanover and from Hanover leading into Westmoreland.

One senior officer told THE STAR that the security forces have been reaping success with these operations. Over the past few days, they have seized a quantity of drugs and illegal firearms and have also issued dozens of traffic tickets, while taking several persons into custody.

"These checkpoints were erected to monitor the no-movement days, but since the Government has announced the relaxation of those days, we have decided to use this as a vantage point, and maintain our presence at various border checkpoints," the cop stated. "We also have foot patrols within the townships, which have proven very successful in all four western parishes over the recent week, with a number of illegal firearms seized in Westmoreland, a quantity of cocaine seized in St James, several persons arrested in Hanover and Trelawny, and dozens of unruly motorists prosecuted."

"These operations will continue over a period of time, as we aim to rid the Area One Police Division of illegal guns and criminal elements, and also to stop the recent rise in murders that has taken place," the cop added.

Three persons were shot and killed in separate incidents across Trelawny, Hanover and Westmoreland on the weekend, while the Westmoreland police managed to seize four illegal firearms, and arrested six persons, including one juvenile, and three teenagers.