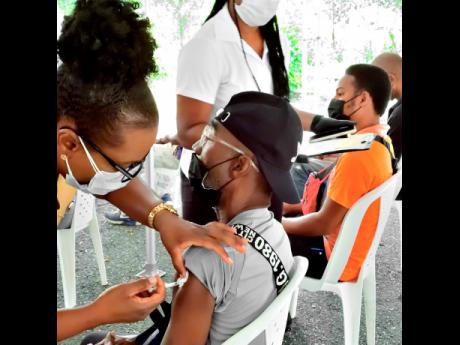 A public health nurse administers COVID-19 vaccines to a resident during a vaccination drive organised by the Rotary Club of Trafalgar New Heights in Maverley Park, St Andrew, on Saturday. The team gave doses to 189 persons during the event.

Close to 200 residents of Maverley and surrounding communities in St Andrew were on Saturday given a boost to protect themselves from COVID-19, following a vaccination drive organised by the Rotary Club of Trafalgar New Heights (RCTNH) in the community.

The club partnered with the Ministry of Health and Wellness and the community group, Voices for Jamaica Foundation, to stage the event in the Maverley Park.

"We are really pleased with the outcome," said Dr Suzanne McDonald Fowles, president of RCTNH. "We had a very ambitious target to immunise 500 residents, but we are happy with the numbers achieved, especially given the high level of hesitancy that continues to take hold of our communities, due mainly to disinformation that has been affecting the level of understanding about how the vaccines protect against severe disease and death," McDonald Fowles said.

"Today's drive means the lives of 200 more people have been saved, and that we are 200 more lives closer to achieving the levels of inoculation necessary for developing herd immunity and getting our country and economy back on track to normalcy," she said.

Up to Saturday, more than 1,900 people had died from COVID-19 in Jamaica in the space of 18 months, with 25 reported deaths alone on Saturday, October 2. Nearly 85,000 people have been infected.

The 200 people vaccinated in Maverley on Saturday add to the approximately 500 vaccinations achieved a little more than a week before at the nearby Pembroke Hall Community Centre staged by Member of Parliament for St Andrew North Western Dr Nigel Clarke, who attended the RCTNH drive briefly on Saturday to lend support.

"I am very thankful to the many volunteers from the community, including the Faith Chapel at the Faith Apostolic Ministries, which allowed us to conduct the registration of the residents in their sanctuary in Maverley Park; the medical doctors and volunteers from the Rotaract Club of Kingston, who gave of their time and effort; and the private- sector companies, which provided support," McDonald Fowles said.