Skating into a brighter future 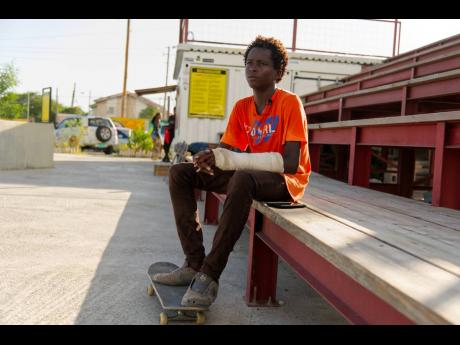 Daniel Mattis at the Freedom Skatepark in Bull Bay, St Andrew on Saturday. 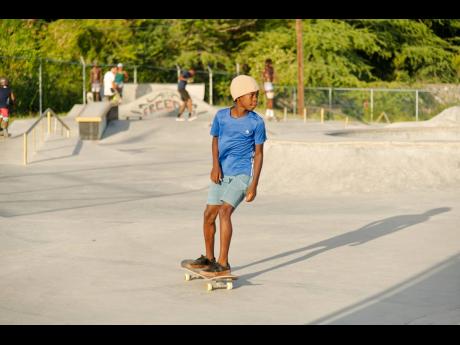 Khori Valentine, 10, takes on of his skate. 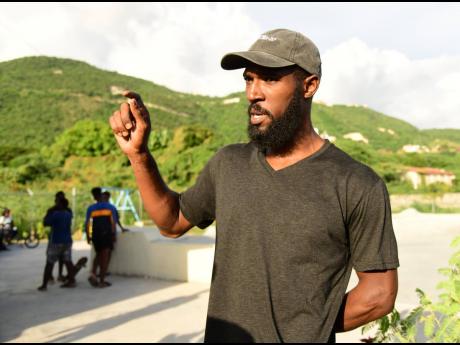 Nineteen-year-old Daniel Mattis finds solace in Freedom Skatepark, located in 8 Miles, Bull Bay, St Andrew. The public skateboarding venue, which has been operational since March, has been attracting several children who use it to hone their skating skills.

Mattis, a student of the Donald Quarrie High School, said that he hopes to become a professional skater one day.

"That's my goal, I want to be a professional skater. Before surfing and skating, I was only playing football and nothing else," he told THE STAR.

Mattis said that he recently broke his left arm after falling on the concrete surface at the park. The teenager said that he was attempting a move when he had the accident, which he said has not deterred him from turning up at the skate park religiously.

"Coming here means a lot to me. It's like my job, I feel like an adult. I do this everyday! A lot of kids come here to skate and that gives me more motivation. Kids from all over Bull Bay come here to skate and I try to show them how to skate. Skating really helps them because most of the kids in the community are exposed to different things that can destroy them," Mattis said.

"My life is more stabilise since I started coming here ... Coming here also helps me to keep focus on school because I want to ensure that I do well in my exams," said the teenager.

Jeff Crossley, one of three managers at the park, said that more than 30 children turn up at the park daily, some of these kids are there to skate while others use it as an opportunity to access free WiFi to access online classes.

"We received donations of tablets from Sandals, and with those tablets we were able to loan these kids who didn't have any. At the same time, they could come here and get Internet connection and do their online classes here also," he said.

Implemented by Concrete Jungle Foundation, which runs youth programmes and builds skate parks around the world, Freedom Skatepark aims to promote positive life skills for children aged six to 16 though the teaching of various life skills that are said to revolve around skating.

"In the beginning we had some wild kids coming here, but we couldn't blame them," Crossley told THE STAR.

"We have a very strong disciplinary programme here with the skating and that is how they can progress. Skateboarding is now a part of the Olympics and we would want Jamaica to enter the Olympics with skateboarding. It is an exceptional sport and this can take them very far, the opportunities that lie in this," he added.