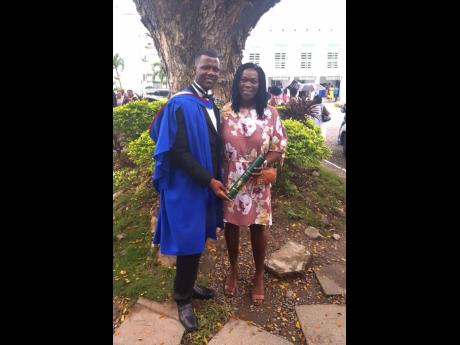 Jadio Dennis and his mother Ruby Gordon at his graduation from Shortwood Teachers’ College. 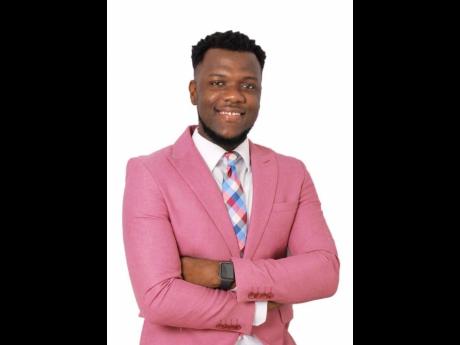 If Jadio Dennis' mother was alive, she would be basking in the news of his recent achievement from the University of the West Indies (UWI), Mona.

However, just three days after he started his master's of education degree in 2019, his mother, Ruby Gordon, died at age 54. A broken yet determined Dennis completed his studies, earning a distinction, in her honour.

"She was supposed to do a hysterectomy surgery and she went into the hospital and didn't come out. She had some post-op complications- she was bleeding internally and they didn't realise until about three or four days afterwards. They rushed her back into the theatre and she came out but after coming out, everything just went downwards from there. On September 6, 2019 she passed away and by this time I started my studies at UWI," he shared.

Gordon earned a living as a caregiver in her Ensom City community in St Catherine. Although her wages may not have been enough to care for Dennis and his seven siblings, he stressed that she made it work. He added that while he was a student at Jonathan Grant High School, he was called Ole and Viva, as the popular snack and carbonated drink were all he could afford.

Dennis, 25, reflected on how dedicated his mother was to assist with his tuition for his first degree in science education from the Shortwood Teachers' College in 2013 and how he looked forward to going home on weekends to get home-cooked meals from her.

"It was very difficult because you know, coping with the passing of my mother, I didn't grow up with any father so it was always me and her. For her to just pass away, it was very, very difficult. There were many nights and days when I would just cry. In fact, one night I was coming from school and I was driving and I was at the stoplight and I thought that the light had changed for me to go. But it was the filter light to go right and I drove off into the middle of oncoming traffic. During the time that I was studying, it was taking a toll on me," Dennis said.

With the stress of his mother's death, adjusting to learning material in the digital space because of the novel coronavirus and figuring how he would finance his second degree, he opted to take two weeks away from his classes and his job at his alma mater. While his lecturers expressed concern, he laboured on, sometimes getting extensions to complete his assignments.

Just a week before his mother's funeral that November, he was awarded a full scholarship of $750,000 by the Ministry of Education that would cover his two-year programme. During this time too, he started a business aimed at providing extra help to students who are struggling with the online modality.

He is focused now on beginning a PhD in leadership in technical and vocational education and teaching and workforce development at the UWI. But Dennis told THE STAR that he cannot break the feeling of nostalgia as he remembers his mother's usual celebration of his successes.

"She sacrificed a lot for me to get my first degree. During my undergrad studies, I had to get student loan and we also had to find money out of pocket and she was very instrumental in that process. She was very happy to know that her sacrifices were paid off and she was very overwhelmed at the graduation. I think I have this unrelenting drive to just do my best and I think she values education and she tried to give us what she did not get," Dennis said.