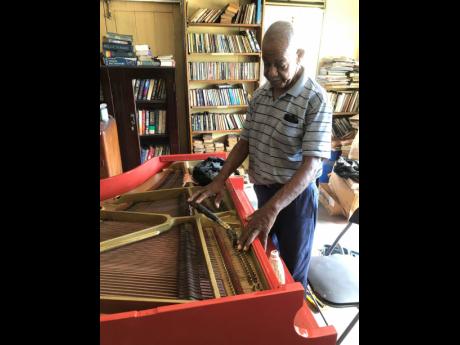 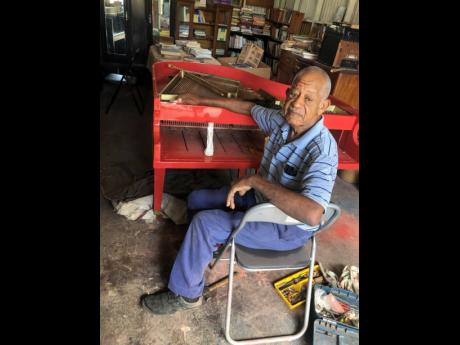 Wellington noted that there aren’t many piano technicians around.
1
2

Piano tuning could be joining the list of dying arts, but for one eccentric music lover, Alfred Wellington, being a piano technician has been a passion he has been fulfilling for more than five decades.

Wellington left his small farming community of Moravia, Clarendon, to come to Kingston in 1970, searching for a venture that would widen his horizons. This venture was of a specific tune, according to Wellington, as he was eager to learn how to fix organs and pianos.

In his household, his father stressed that he plays an instrument, with his preferred choice being the accordion.

"I was a little enthused with instruments because my father played the guitar. I just like music but I am not a musician," he humoured.

The octogenarian learnt electrical installation at St Andrew Technical High School, but found himself in the company of piano technicians who helped curate his skills in aural piano tuning. But after years of partnership, the group split and Wellington became a solo act.

"I now knew the trade, it wasn't bad. I could tune it up and repair the action so that it would strike the hammer, so the keys could play. I knew what to do and I was confident," the technician explained, while demonstrating on one of the organs in his workshop.

In his office on Constant Spring Road, upright and grand pianos await the touch from the grand master, armed with his tuning hammer and an array of other tools. While repairs can take up to six months on one piano, it is a task to which Wellington stays committed.

For him, it is the difficulty of pulling apart the piano and then piecing it back together that gives the thrill. During the interview, he was not shy to demonstrate how the strings are tightened and aligned to give the perfect tunes. Ironically though, he has not yet reached the level of a master pianist such as Beethoven, and admits that he desires to learn.

However, the Alston Elementary School alumnus chimed in that piano technician services are being lessened, as people no longer find it profitable to engage in the trade.

Only a handful of elderly men can be found doing it as many do not have an eye for details, lack patience and do not have expertise with a unique ability to carry out this craft.

In the 21st century, people are opting for electronic keyboards and software that generate beats rather than organic instruments. But Wellington told THE STAR that music forms a necessary structure in society providing stability. He urged Jamaicans to get involved in playing musical instruments to improve their mental state.

"When I used to play my accordion, I felt enthused and overjoyed. Humans should love music because from David time in the Bible, when he used to play the harp, so it is a long-time art. [Music] can help the society with stability and how that works is that we would be calmer and [music would] thrill your soul. It is necessary, especially in a society like this. I think persons should play something because music makes people calm and if you can play at night time, do it, because music works on the spirit. It works on the heart, " Wellington said.