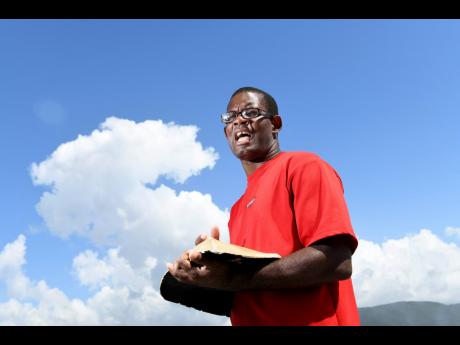 A man who said that he was involved in the occult world for 22 years is warning cops who were engaged in Sunday's operation at Pathways International Kingdom Restoration Ministries in Montego Bay, St James, to be prepared for spiritual attacks.

"Everyone who went on that compound to stop the ritual is going to come under a spiritual attack," he said.

Two persons were murdered at the church, allegedly as part of a religious ritual. While being thankful that the intervention of the police prevented the loss of more lives at the church -- where it is said that 144 persons were to be sacrificed -- Smith said that his knowledge of the dark world has left him to conclude that the persons who broke up the event are not safe.

Two persons died, allegedly as part of the religious ritual, and a third was shot and killed by police who stormed the church after being advised of the chilling events that were unfolding.

"These spirits would have got a sacrificial offering of three human blood, so on that date each year they are going to return and if they cannot get this, then there are going to visit the persons who had stopped the ritual," he said.

Head of the church, Kevin O. Smith, and other members of his congregation have been taken into police custody following the nightmarish incident. They are facing multiple criminal charges. Smith said that during his time in the occult world he participated in countless numbers of rituals, some of which included animal sacrifice, but not the shedding of human blood.

In the meantime, the self-styled spiritualist said that persons are normally placed under a spell after joining cults.

"It is easy for persons to get manipulated and treat the head of a cult like a god. What persons don't understand is that demons can be transferred through just a touch. Persons can touch you and a spirit just start using you as a host. The occult world is satanic and the higher you climb is the higher the demons demands are of you. It is best to stay as far as possible away from those groups," Smith said.

The 46-year-old man said that his introduction to the occult took place when he was 14 when he started attending a revival-type Church.

"I didn't know it was an occult at first. I started out good, but the more you continue to grow in the realm of the spirit is the more bad you will become, because different types of spirits begin to present themselves to you," he said.