Rasta holds his position on Christianity 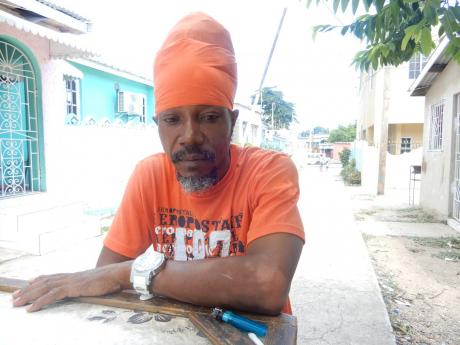 Steve Richards, the Rastafarian who was beat down by a pastor in Arnett Gardens, St Andrew, two years ago.

Steve Richards attained infamy two years ago after he was kicked and pinned to the ground by a street pastor after he mocked and threw rum in his face.

The pastor, Valancy Hawes, was preaching the word of God in a section of Arnett Gardens when Richards started taunting him. Before the fight started, Hawes warned Richards to 'Hol yuh position, Satan', but Richards did not heed the warning.

Hawes then beat the hell out of Richards. Following the incident, Richards and Hawes made peace. The Rastafarian, who blamed his behaviour on intoxication, said he still views religious leaders with scepticism, a position which he said is justified having heard of the spine-chilling events that unfolded at Pathways International Kingdom Restoration Ministries in Montego Bay, St James, last Sunday.

Richards said he was not surprised when he learned about the alleged human sacrifice that took place in the church. He said that the events in Montego Bay reminded him of the Jonestown tragedy in 1978, where more than 900 Americans - members of a San Francisco-based religious group called the Peoples Temple - died after drinking poison at the urging of their leader, the Reverend Jim Jones.

"These people keep waiting for Jesus and when they don't see him, they do their own thing. In the 1970s, remember where Jim Jones tricked the people and poison them in the name of Christianity. It is pure madness and if I should encounter the pastor down in Montego Bay any day, I would tell him to stop fooling the people and stop telling the lies," he said.

Pastor Dr Kevin O Smith and 16 men from his organisation remain in custody as the police continue their investigations into the stabbing death of two members during a bizarre ritual on the church compound in Norwood Avenue on Sunday.

"These pastors know that they are false prophets because they are the ones who will tell the people that they are born in sin and shaped in inequity. If I keep telling my child that he was born in a tiefing world, he is going to steal. Christianity has killed millions of people. Christianity itself is false and this religion is just used to control people," he said.

"All of what happened in Montego Bay falls under deception. The members were deceived. Christianity, I believe, is satanic and that is why they always keep defending every little evil that they have done. We tend to run with everything that is thrown at us and then the end product is going to be what happened in Montego Bay and more. I am not going to be surprised if something similar or worse happens in the future," Richards said.