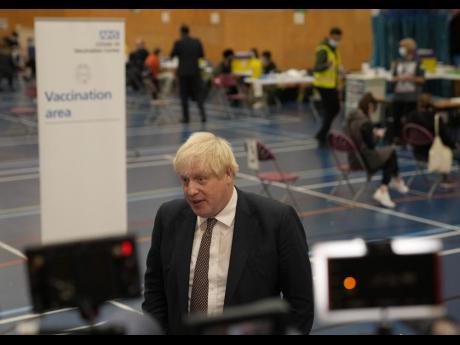 LONDON (AP) — The British government’s scientific advisers urged the government on Friday to ensure coronavirus restrictions can be introduced rapidly, as the rate of new infections continues to grow.

Britain has recorded an average of 47,000 new cases of COVID-19 a day in the past week, up 18 per cent from the week before, according to figures released on Friday.

There was an average of 135 deaths a day, a 16 per cent rise from the previous week.

Britain has recorded more than 139,000 coronavirus deaths during the pandemic, the highest toll in Europe after Russia.

Many scientists are urging the government to reintroduce some of the measures that it lifted three months ago when more than a year of restrictions ended, including mandatory mask-wearing indoors, social distancing and work-from-home advice.

The Scientific Advisory Group for Emergencies, a body of scientists that advises the government, says “policy work on the potential reintroduction of measures should be undertaken now so that it can be ready for rapid deployment,” according to minutes of a meeting held last week.

The group said that of all the measures the government is considering, the “re-introduction of working from home guidance is likely to have the greatest individual impact on transmission.”

Prime Minister Boris Johnson’s Conservative government says it may reimpose some restrictions as part of a fall and winter “Plan B” — but not yet.

Britain is relying almost exclusively on vaccines to keep the virus at bay during the fall and winter months, when respiratory viruses circulate most widely.

Almost 80 per cent of people 12 and over in the U.K. have received two vaccine doses and millions are being offered a booster shot, including everyone over 50.

Scientific modelers in the advisory group said a big spike in hospitalisations like the one seen last winter was increasingly unlikely, and that booster vaccines could keep the spread of the virus “at levels similar to or lower than currently observed.” But they said there could still be thousands more coronavirus deaths in the coming months.

The prime minister, who visited a vaccination center in London on Friday, said the current infection level was “not outside the parameters of what was predicted.”

Johnson urged people to take “commonsensical” precautions such as wearing a mask, and to get a booster shot as soon as they were eligible — six months after the second dose.

Though some have suggested a new lockdown may be needed if cases continue to rise, Johnson dismissed the idea.

“At the moment that we see absolutely nothing to indicate that that’s on the cards at all,” he said.