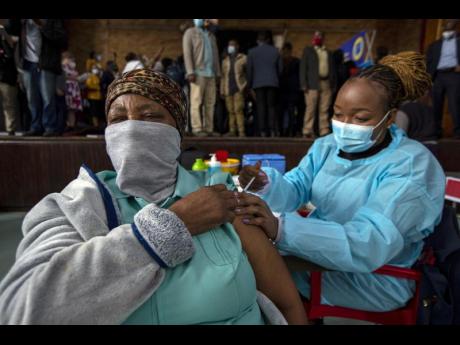 In this Friday, Oct. 1, 2021 file photo, a woman receives her second Pfizer-BioNTech vaccine jab from a healthcare worker during the inaugural vaccination weekend drive in Katlehong, east of Johannesburg, in South Africa. (AP Photo/Themba Hadebe, File)

DAKAR, Senegal (AP) — Senegal and Rwanda have signed an agreement with German company BioNTech for the construction of its first start-to-finish factories to make messenger RNA vaccines in Africa.

BioNTech, which developed the Pfizer-BioNTech COVID-19 vaccine, said Tuesday that construction will start in mid-2022.

It is working with the Institut Pasteur in Dakar, Senegal’s capital, and the Rwandan government, a statement said.

“State-of-the-art facilities like this will be life-savers and game-changers for Africa and could lead to millions of cutting-edge vaccines being made for Africans, by Africans in Africa,” said Matshidiso Moeti, the World Health Organization’s Regional Director for Africa.

“This is also crucial for transferring knowledge and know-how, bringing in new jobs and skills and ultimately strengthening Africa’s health security.”

Ugur Sahin, the co-founder and CEO of BioNTech, said its goal is “to develop vaccines in the African Union and to establish sustainable vaccine production capabilities to jointly improve medical care in Africa.”

BioNTech had already agreed in August to work with Rwanda and Senegal to establish facilities in Africa capable of end-to-end manufacturing of mRNA-based vaccines, under license.

The novel mRNA process uses the genetic code for the spike protein of the coronavirus and is thought to trigger a better immune response than traditional vaccines.

Scientists hope the technology, which is easier to scale up than traditional vaccine methods, might ultimately be used to make vaccines against other diseases, including malaria.

BioNTech said the facility in Africa will eventually produce about 50 million doses of the vaccine per year, with the capacity to increase.

BioNTech also said it is in discussions for expanding its partnership with the South African vaccine manufacturer Biovac, which is based in Cape Town.

Biovac will assemble the vaccine using ingredients provided by BioNTech, a process called fill and finish.

That production will begin in 2022 with a goal of reaching more than 100 million finished doses annually.

The BioNTech announcement was criticized by Rohit Malpani, an independent public health consultant in Paris, who previously worked for Doctors Without Borders.

“This is too little too late,” said Malpani.

“Nothing should have stopped BioNTech from doing this a year ago when they were building factories in the U.S. and Germany. The fact that they sat on their hands and allowed this vaccine apartheid to proliferate and have left millions of people without vaccines shows that we cannot trust these companies.”

Malpani pointed out that the agreement is to produce the vaccine under license to BioNTech.

“This may expand production, but control over the vaccines still ultimately rests in BioNTech’s hands,” he said.

“By the time these vaccines arrive, it will be far too late for millions of people. This does not ensure that countries will have access to vaccines or that they will be able to better respond to future pandemics.”

In contrast, Afrigen Biologics and Vaccines in Cape Town has established a lab and assembled scientists to produce an mRNA vaccine that is a replica of the Moderna vaccine, using information that is publicly available.

With backing from the WHO, Afrigen plans to develop and produce an mRNA COVID-19 vaccine independent from Moderna or other big drug companies.

In July, Senegal had announced that the Institut Pasteur would manage a new manufacturing hub to produce vaccines including for COVID-19.

The hub was estimated to cost $200 million and would be financed partly by funds from European and U.S. governments and institutions.

These vaccine manufacturing hubs in Africa will help reduce its dependence on imports, as the continent currently relies on imports for about 99% of its vaccine needs, according to the WHO.

Africa and its 1.3 billion people remain the least-vaccinated region of the world against COVID-19, with just over 5% fully vaccinated, according to the Africa Centers for Disease Control and Prevention.