Lawyer accuses witness of lying due to jealousy 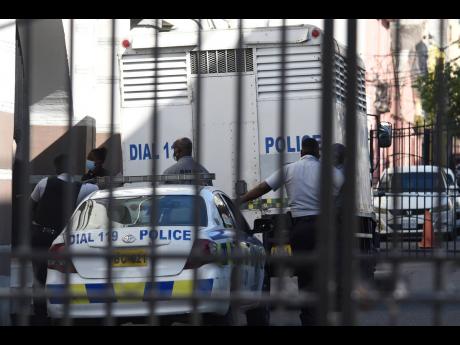 Defendants in the Clansman-One Don Gang trial arrive at the Home Circuit Court in downtown Kingston.

The former top tier member of the One Don Gang yesterday burst into laughter during the ongoing trial after one of the defence attorneys claimed a disagreement over a woman caused him to tell lies about her client.

The prosecution witness had testified in the Home Circuit Court that the defendant in question, Carl Beech, had volunteered to guide one of the gang's shooters to the Lauriston community in Spanish Town, St Catherine, where a man called 'Outlaw' was shot and killed. But during her cross-examination yesterday, Beech's lawyer Cecile Griffiths-Ashton told the witness that he had fabricated the account about her client and about him being a gang member.

"Would you agree with me that the only reason you have come to this court and lied on Beech is that there is a disagreement that you had with him over a female?" she asked.

The witness, who is testifying via video link, then broke out in laugher after shouting out, "Wooiii!"

"Really and truly," he continued while laughing and flashing his hands around. "[He had] no disagreement with me worse over women," he continued amid laughter from the court.

He, however, regained his composure after Chief Justice Bryan Sykes told him "You can stop now".

Before the witness' comical outburst, the lawyer suggested that he neither saw her client on the day of Outlaw's murder nor had carried him in his car anywhere; but he disagreed.

She then asked if he was aware that the defendant who he claimed was Outlaw's killer was not the one charged. The witness replied that he was aware, as the person who had been charged, defendant Daniel McKenzie, had informed him of such, but told him that he was not worrying because he wasn't the killer.