Church in the ‘Wild Wood’ 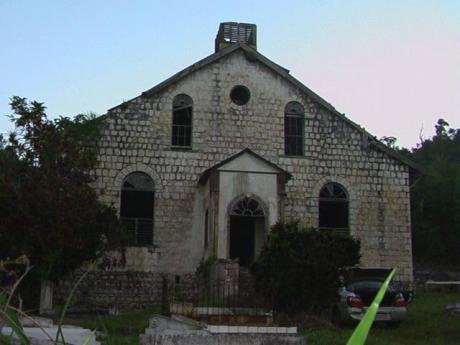 Frontal view of the now abandoned and spooky ‘Church in the Wild Wood’. 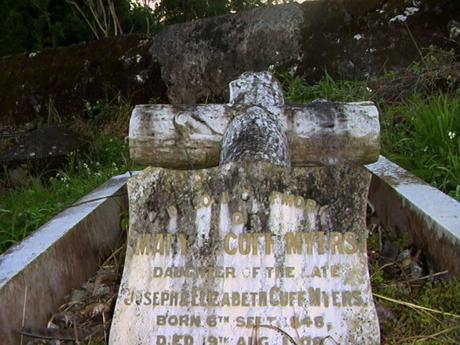 Strange looking tombs such as this, were seen at the ‘Church in the Wild Wood’, in Manchester.
1
2

There was no moon in the sky and only a few bright stars last Friday, but whatever it was that had people talking about it being haunted, THE STAR was ready to find out the night secrets of the abandoned Anglican church somewhere in Mile Gully, Manchester.

The team of Dwayne, Daraine, Peter and Jermaine formed the 'brave' quartet that would travel to the location which did not have a single street light within a one-mile radius. Little did we know that seeing a ghost would have been more pleasant than the hair-raising, blood-chilling elements that the night brought.

Almost out of nowhere it jumped at us, neatly tucked away in a corner along the road. It was too dark, too old and outright too scary. We were at the 'church in the Wild Wood' in the dead of night, yet nothing was moving.

Peter, the designated driver, stopped the vehicle in the middle of the road, and along with the others, gaped at the church for about two minutes.

Peter was seemingly first to come to his senses and asked, "Is this really the place?"

There was no gate to open, just two concrete columns on either side. So Peter drove slowly through the entrance. By this time, all four guys had again gone silent.

Peter then stopped the vehicle at a flight of steps which led to the entrance of the church itself.

It had been 15 minutes since the team arrived and still no-one had alighted from the vehicle.

So stricken with fear had the guys become by this time that doubts began to surface in their minds.

Jermaine said, "Mi nuh think a ya so, eno, mi nuh see nuh sign." After which Dwayne replied, "Mi nuh think so either, eno. Mek we lef and drive go up di road and check."

No one was willing to brave the spooky-looking church and its surroundings as everyone was still in the car.

This was changed, however, as Peter said, "Looks like a me first. Mi flashlight in the trunk".

The other guys laughed at Peter before encouraging him to make a hasty move for his apparatus.

"Jus do it fast nuh my youth. Jus hurry up," Dwayne said.

"Alright, one, two, three," Peter counted before springing from his seat and running to the trunk and getting his flashlight.

Now armed with his flashlight and red tam, Peter told the rest of the team that it was time to exit the vehicle and get down to business.

Inside, there was very little to look at, but the team still walked about and examined whatever there was which drew their attention.

While Jermaine took a photo of a sign which was fixed on a section of the wall, Daraine said, "Mek wi lock off di flashlight dem pon him nuh."

The idea sounded like a good means of getting some good laughter, so Peter and Dwayne agreed and in a split second, there was total darkness.

"A wha unnu a do? Unnu easy nuh!" shouted Jermaine as he sped through the darkness thinking that the rest of the team had deserted him.

He soon met back up with the others who were only about a metre away.

The team then decided that it was time to venture outside into the graveyard.

Once again, Peter spearheaded the move by staying in front. The others followed and tried to stay as close to each other as possible with nobody wanting to be as little as a foot behind.

Peter returned to the team and once again, he declared, "Trust mi, da place ya spooky, it seem haunted fi real."

Daraine and Jermaine, who were seated at the back, were now fast asleep, while Dwayne and Peter looked around, hoping to even glimpse some form of movement in the surrounding graveyard. Nothing was seen or noticed.

The sun had begun to rise from its nest, and one by one, the guys awoke.

"You really sleep right through?" Peter asked before admitting "Mi neva si nuttin still, but mi wake up like every five minutes and look."

The team agreed to make one last journey into and around the church.

Nothing seemed different, apart from a swarm of bats which occupied the roof of the church and flew in and out.

Nothing was seen or heard, but the gut feeling one gets from the mere sighting of the 'church on the Wild Wood', left one's imagination to run wild and think that this place really is haunted.