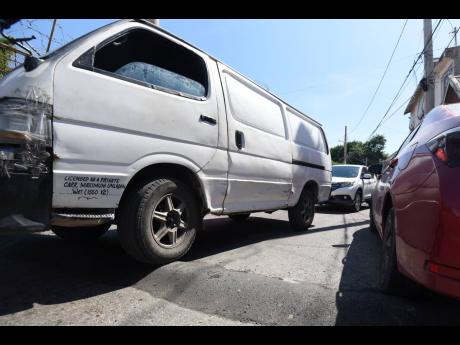 Motorists make their way along Grants Crescent, off Hagley Park Road, St Andrew, trying to navigate the sleeping policemen that were erected recently. 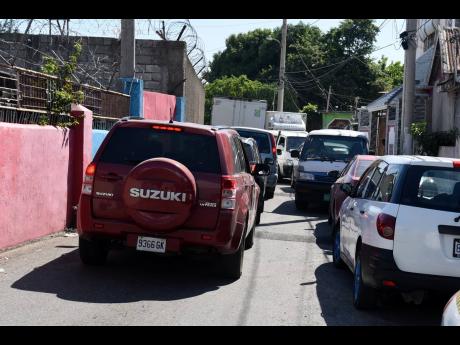 Residents say that the sleeping policemen help to prevent speeding in the area.
1
2

Motorists in a hurry should probably stay clear of Grants Crescent, a narrow roadway in Richmond Park, St Andrew, as there is now a build-up of traffic when traversing the space.

But the delay is not because of potholes. Eight speed bumps, or sleeping policemen, have been erected on the approximately 250-metre roadway. A small business owner said, while he agrees that eight are a bit too much, he is relieved that the motorists are cutting their speed.

"Even with the sleeping police, accidents still a happen fi show yuh. Just before unno reach a bus squeeze up a car. Mi na go tell any lies, the traffic build up more but it better than if dem a speed because the taxi man dem nuh play with da road ya. If yuh notice we barely have any road because a company build dem wall out in the road. Mi nuh agree with the eight sleeping police though. Four a dem was enough but mi happy say dem can't deal with the place like Dover anymore," he said.

Another resident told THE STAR that the avenue was a haven for bike robbers and she believes the speed bumps will decrease incidents of theft. She stated that the sleeping policemen were erected last week but said that, to her knowledge, no permission was given by the relevant authorities.

"This will slow down the bike man dem because dem nuh ramp fi grab phone and ride way. Dem speed trap ya make it hard for them because, if yuh notice how dem high, the police dem nah sleep. Maybe dem too high but it's a good thing because, especially inna di Christmas time ya, is like a work di bike man dem go. Yuh can't walk in peace, plus the road very narrow an a bare racing gwan. Mi just know say mi go a mi bed and wake up to dem di next morning. Nobody nah go give permission to build so much but we just haffi do what we haffi do," the woman stated.

A taxi driver urged the relevant authorities to remove the bumps as they are damaging vehicles.

Head of the St Andrew Central Police Division, Senior Superintendent Marlon Nesbeth, said it is illegal to erect sleeping policemen without the permission from the relevant authorities including the National Works Agency.

"If that was not in place then we'll look at it to see whether to sanction or approve but there are needs for a discussion. We have not received any complaints but we will be looking into it," he said.