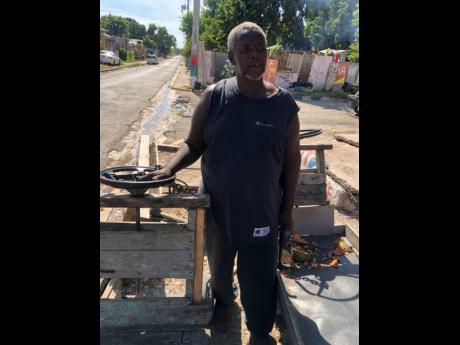 Robert Nickle is known for making sturdy handcarts despite having only seven fingers. 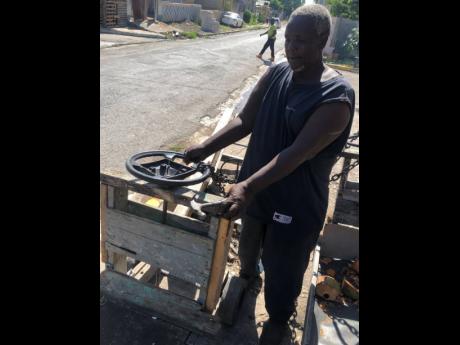 Robert Nickle details how he makes his handcarts.
1
2

For peddlers in the Coronation Market and its surroundings in downtown Kingston, handcarts are a popular mode of transportation for goods.

The go-to man for these carriages is Robert Nickle, who has made his niche in handcart making. The 60-year-old can be found in Trench Town, knocking at plyboard and configuring nuts and bolts to a steering wheel to get the cart moving. Interestingly, Nickle does this with only seven fingers. He lost three digits after intervening in a fight in the 1980s.

"When me used to work down in the market with my cart dem, war did a gwan up here (Trench Town) with Tivoli man dem for four years. Me did have a man working with me and me carry him down a town and me nuh know why him go trouble the youth dem from over Lizard Town and him tief the man bag a onion. After him tief the bag a onion, the youth mussi cut him in his face and me a try take the machete from him. Him tun pon me and start chop me up. Me put up my hand dem in the air and him chop me and I lose three fingers," Nickle explained. He lost two fingers from his right hand, and the other from his left. Since then, residents call him 'Thumpa'. But the injury has not hindered him from earning a livelihood for about 15 years.

Nickle hails from St Thomas and was drawn to the market district selling ground provisions. He needed an innovative way to get his produce from the market trucks into the market. He had to use a box crate along with 'crocus' bags, but that tired him easily. After seeing another peddler with a cart, he got the idea to make them.

"Just get the board, the chassis, the steering and the wheels and in a half day you done. It nah take nuh long time to make a handcart. Me can make four handcart for the day and when you jump pon one a dem, you fly reach a town in no time," he exclaimed.

Not even the sweltering sun could prevent Nickle from completing two handcarts he was making when the news team caught up with him. Armed with his hammer in his left hand, he drove nails into the plyboard with precision. One of his carts goes for $30,000. Nickle admitted that earning a profit on constructing carts is dependent on the time of year, such as Christmas, when the number of shoppers increases. However, he also rents carts.

While he is eagerly anticipating the arrival of the Yuletide season, he told THE STAR that handcart owners sometime fall victim to extortionists and thieves. He said that he is forced to chain his carts or have a special imprint on them as a distinguishing mark.

"I did licence dem with the Kingston and St Andrew Municipal Corporation when dem say fi do it and I have a lot of carts too. But I did end up lost some of them during the Tivoli Gardens incursion [in 2010] when the war down in the market, and dem throw some a dem in the fire," Nickle added.

He pleaded with the young to get involved in carpentry and spend less time idling or getting caught in illegal activities.

"Me a get older now and me siddung a watch dem a run up and down with gun and dem sumndeh and me just a say unnu come learn how to build cart so unnu can probably push and sell bag juice a town. When you get into handcart making, you can make a likkle money, trust me," he said.