Alleged gangster told cops he was a musician 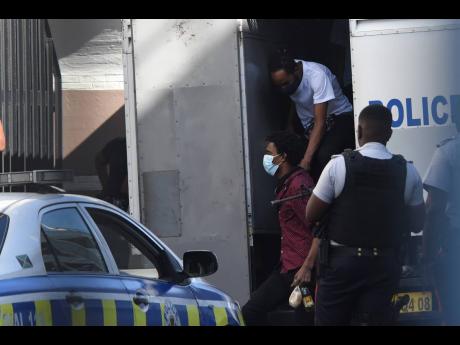 One of the alleged top shooters in the One Don Gang had reportedly told the police when he was caught that he was a musician and an associate of entertainer I-Octane.

The chief investigator in the case testified yesterday that the claim was made by defendant Fabian Johnson, otherwise called 'Crocs', when the police picked him up on Beeston Street in downtown Kingston in June 2019. Earlier during the trial, the prosecution's second star witness testified that the reputed leader Andre 'Blackman' Bryan and other alleged gang members would frequent the entertainer's St Andrew studio. He also said that the alleged gang members, him included, visited the location multiple times to record music with the entertainer.

The police witness said that when Johnson was arrested, he was pointed out by the ex-member of the gang. Additionally, he testified that when Johnson was at the police station he begged the police a phone call to contact Stephanie Christie, the lone female defendant, who the court previously heard was his girlfriend. The police witness later testified that Christie was arrested in June at a church in St Thomas on the day her husband, a pastor, was to be ordained.

He also told the court that after speaking to Christie, he recognised her voice as the female that he had constantly heard during the gang's conversation when the prosecution's second witness had left his phone line opened during an operation to apprehend members of the gangs who were said to be travelling with illegal firearms.

The cop said he also recognised one of the telephone numbers that she had given him as the number that Johnson had asked him to call when he was earlier arrested.