Oh! Christmas tree? Cardboard display is the talk of a town 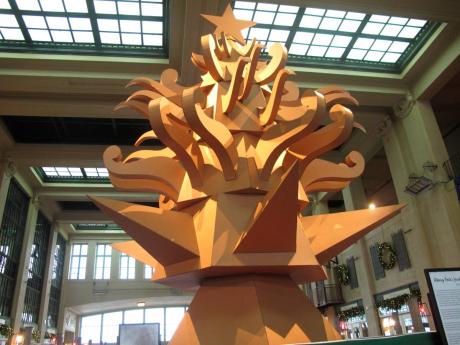 A Christmas tree display made out of cardboard.

It has been called beautiful, awesome and brilliant, a transcendent work of art that reimagines the holiday experience with local touches of the Jersey Shore.

It also has been called ridiculous, ugly and hideous, something akin to a pile of Amazon shipping boxes or a giant cat-scratching post. Good grief!

But this year, in its place, is art made of cardboard in the shape of a tree that also incorporates elements of the seashore, the city's architecture and its rich musical heritage, which most notably includes Bruce Springsteen. It is designed to be recycled after it is dismantled.

"I like that it's different," said Chris Trifari of neighbouring Neptune as he strolled by the tree. "It's pretty interesting."

"I think it's very creative," said Asbury Park resident Elizabeth Khimitch, who brought her two dogs to be photographed in front of the display. "It fits the Asbury vibe, which is different and unusual."

Others were not as appreciative.

"It looks like an Amazon package," said Anthony Solimando, a former resident of nearby Neptune City who recently moved to Hoboken.

"Not a fan," added Amy Mackey, who lives near Asbury Park. "Asbury has conformed into this artsy town, but tradition is tradition! This is art, and I wouldn't take my child's picture in front of this tree. Can't we just have our traditional tree?"

"No lights?" said Zuzanna Humeniuk, of Wall. "It's creative, but not festive at all."

The change came about this year when the city's art community approached Madison Marquette, the private owner and manager of the Asbury Park boardwalk, about creating a Christmas tree sculpture for Convention Hall, according to Austin Leopold, the boardwalk's property manager.

"Because the boardwalk is a focal point for Asbury Park's thriving arts and music community, and because we have a long-standing and very strong relationship with top-name local artists, when presented with the concept for the sculpture, we passionately embraced the idea," Leopold said.