Eight firearms and 98 rounds seized over the weekend 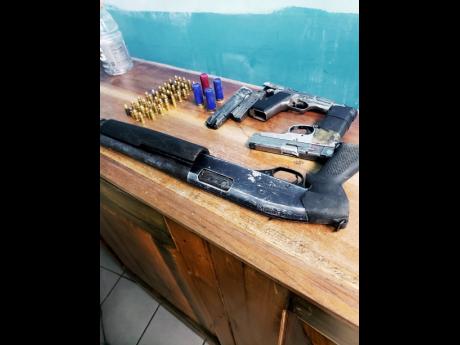 Eight firearms and 87 rounds of ammunition were seized between Friday, December 3 and Sunday, December 5 as lawmen continue their heightened operational activities to increase public safety and citizens’ security.

On Friday, December 3 about 10:15 p.m., a Taurus 9mm pistol was seized in Belvedere, Bethel Town in Westmoreland after the driver of a motor vehicle was instructed to stop. The vehicle was searched and the firearm found; five occupants of the vehicle were taken into custody.

An Ak47 rifle, a 9mm pistol and 25 rounds of ammunition were seized on Saturday, December 4 following police operations on Clayton Close in Spanish Town, St. Catherine. Reports are that about 5:15 a.m., a man, who is a person of interest, was seen in a vehicle which was subsequently searched and the pistol found, minutes later the rifle was found under a metal container. The suspect was arrested in connection with the seizure.

On Sunday, December 5 about 9:00 a.m., a Browning 9mm pistol and 18 rounds of ammunition were seized during a snap raid on Olivier Road, Kingston 2. The firearm was found hidden in a chicken coop. One man was taken into custody.

Hours later about 5:30 p.m., lawmen assigned to the August Town Police Station seized a Taurus .38 revolver and five rounds of ammunition in Bedward Gardens, Kingston 7. One man was arrested after attempting to flee from the police.

While this incident was unfolding, the Constant Spring Police seized a Taurus 9mm pistol, a Beretta pistol and 32 rounds of ammunition in Ackee Walk, St. Andrew. One man was accosted and the firearms, with the ammunition, were found in his possession. He was arrested in connection with the seizure.

Later that evening on December 5, members of the Quick Response Team were on patrol on Kew Lane, Kingston 5 when a group of men ran on seeing them. Checks were made on a premises and a Smith and Wesson 9mm pistol with seven rounds of ammunition was found. One man was taken into custody.