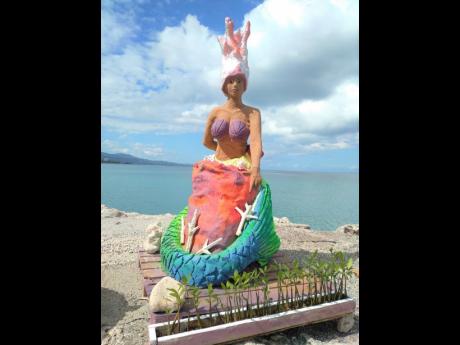 The recently unveiled mermaid in the Montego Bay Marine Park (MBMP), now sports a new look after being painted with environmentally safe paint by members of staff at the MBMP. Plans are to install an information board to answer the many queries curious visitors have been making regarding mermaids and their mythical powers.

The recently unveiled mermaid at the Montego Bay Marine Park (MBMP) is gaining popularity and the park's executive director, Hugh Shim, and staff have added colour to it.

They will also be erecting an information board near the waterfront's latest attraction.

Shim told JIS News that a surprising number of persons have been visiting the MBMP to see the mermaid statue and making enquiries about the mythical creature.

The MBMP is currently awaiting approval from the National Environment and Planning Agency to crane-lift the statue to the location identified as Jamaica's first, and Latin America's fourth, underwater sculpture park after Mexico, Grenada, and The Bahamas.

In the meantime, the decision was made to enhance the appearance of the environmentally friendly figure.

"The statue was painted with water-based [non-toxic] paints, because we wanted to make it a little bit more attractive," Shim said.

He added that there are plans to build-out the underwater attraction with two additional statues in the coming year. Construction is set to begin in February.

With the establishment of the underwater features, the MBMP is adding to its menu of points-of-interest for underwater adventure seekers, such as scuba divers and snorkellers, and those who would prefer experiencing the grandeur of the coral reefs from above on glass-bottom boat tours.

Shim described the coral reefs condition as "pretty stable" and will improve once the sculpture is placed in the sea.

"It is also hoped that the Montego Bay Underwater Sculpture Park will take the strain off some of the popular reefs and dive sites," he said. "We are not having it for recreational purposes [only], meaning people can snorkel and swim around [but] it is supposed to actually attract more small fish that can grow around it [and] can also attract coral growth."

The mermaid statue was unveiled on October 23, and is being touted as a symbol of hope for the rejuvenation of the Montego Bay coral reef, which is making a comeback from degradation.