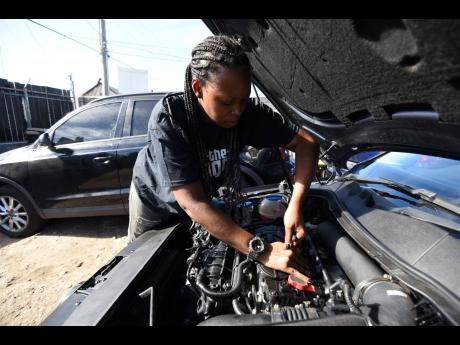 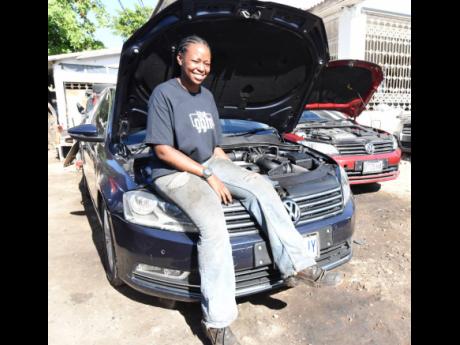 Stephanie Stephens says that she loves her job and won’t give up auto mechanics anytime soon. 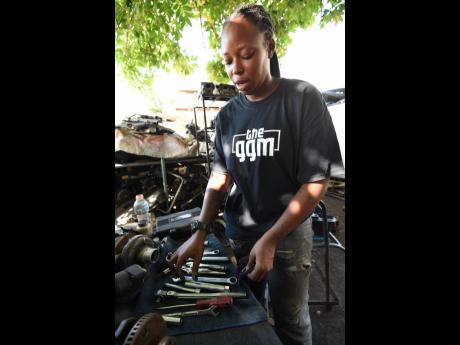 Stephens cleans her tools after completing a job. 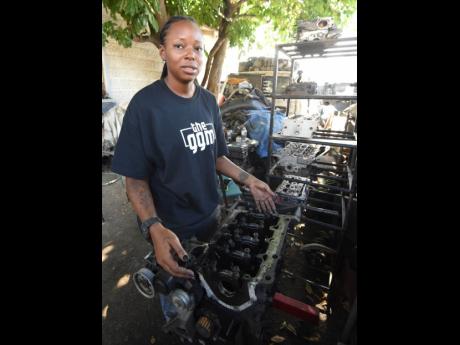 Stephens explains some of the intricacies of her job.
1
2
3
4

When one enters an auto mechanic shop, it's not the norm to find a woman eager to fix cars.

But Stephanie Stephens embraces the term 'grease monkey' wholeheartedly. Fascinated by all things related to motor cars, Stephens' journey in auto mechanics started in 2018, after she went to a mechanic to have the water pump on her Jetta Volkswagen repaired.

"After it got fixed, I asked him if he would be interested in teaching me because it is something that I have always been interested in doing but I never had anyone to teach me. He said as long as I was serious, he would teach me," she related.

When THE STAR visited her base in the Corporate Area, she wasted no time in naming the various parts of the vehicle, the tools she uses daily and the steps taken to address the various issues with the motor vehicles. The Mandeville, Manchester, native admitted that she never had a set career path. She found herself reading for a forensic degree in 2013 at the Mercyhurst University in the US. However, she decided to give up her corporate wear for oily jeans to do something she was passionate about. She reflected on her first day on the job, when the team ventured outside Kingston to work on an Audi Q5. She said that the best part of her career is giving life back to cars that have been stationary for some time.

Contrary to the stereotype of women in the automotive sector, the 31-year-old said that she is not afraid to get her nails dirty and covered in oil.

"People have come here before and they think that I only do administrative work. They don't think I can do the heavy-duty work or I don't want to get dirty or greasy. They think that you just maybe not paying attention or you not strong enough or it's not something that you would be interested in for very long. But to me, I feel like no matter the gender, your profession is your profession and what you're passionate about is what you're passionate about," Stephens said.

She joked that the grease is not a major issue as she practises regular hand-washing, weekly manicures and always has her grease cloth. She specialises in fixing Audis and Volkswagens, as well as working strictly on diesel vehicles. Her aim is to make them quieter as diesel cars tend to be noisy.

Currently in the process of receiving certification from the Jamaican-German Automotive School, the car enthusiast stressed that she does not see her job becoming obsolete even with the influx of hybrid and electrical cars. In fact, she implored her peers to adapt to the changes in technology.

In love with her job, Stephens does not see herself putting down her tools. Rather, she revealed that she intends to dig deeper in the field of mechanics.