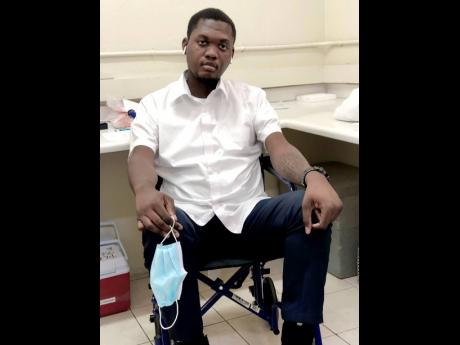 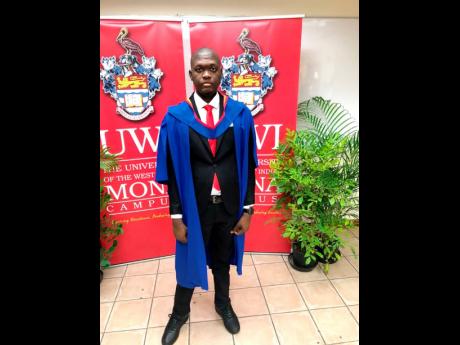 While a student at St Catherine High, basketball was undoubtedly Derron Thompson's favourite sport. But when he attended a summer camp in 2009, he realised that something was wrong with his body. Running and walking long distances became increasingly difficult, and playing basketball became impossible as he could not lift his left hand above his head.

Eventually in 2013, he was diagnosed by a neurologist with facioscapulohumeral muscular dystrophy, a disorder that is characterised by muscle weakness and degeneration. The diagnosis was a bombshell for Thompson, who cried as the doctor told him it would be a 'slow death' for him.

"However, I was already living with the symptoms so ... at that point, I just decided that, whatever comes, I'll just have to handle it as I go along and try to live," he said.

Thompson's older brother also struggles with the disorder, as did his late mother, Maureen Clayton. Despite his diagnosis, Thompson is living a normal life, attending social gatherings, and has been gainfully employed at the National Public Health Lab as a technical assistant for the past 11 years. His job involves receiving and sorting specimens sent by hospitals across the island for testing.

"I think we're all here to serve. So every time I'm called upon to be of service in my organisation, I try to do my best. Even in 2011, most persons there saw me as a normal person until they actually sat and watched how I did things. If you don't sit and watch how I walk or how I handle things, you wouldn't know that I have a disorder," he said.

Thompson was recently named the third-place winner of the National Commercial Bank Foundation's Grant a Wish promotion, and it was only after the publicity from the promotion that most of his friends became aware of his condition. Decked in his necessary personal protective gear and positive mindset, 'Lenky', the nickname given by his colleagues, remains dedicated to working through the pandemic.

"It's just a case where I love what I do. I look at myself as providing a service to this country. So if it is a case where up until I feel like my time there is done, I will continue to give 110 per cent every day. The main lesson I have learnt is to keep going, keep putting in the work because the reward is coming," Thompson stated.

The 30-year-old said that the greatest challenge currently is walking and, as such, he has to use a wheelchair. The De La Vega City, St Catherine resident initially eyed jobs in other fields but, as his condition worsened, he had to change his plans. Thompson told THE WEEKEND STAR that he then recalled winning a business competition while at the Portmore Community College and this influenced his decision to enrol at The University of the West Indies (UWI), Mona in 2017 to read for a bachelor of science degree in management studies. He gave up his Saturdays to attend weekend classes and, even with the disruption to the education sector by the novel coronavirus, he attended classes during the week after completing 13-hour shifts at the public labs, to successfully complete his degree in 2021.

"Everything about my UWI journey was memorable but the biggest thing for me was meeting persons who helped me," he added.

Thompson confessed that there are times when he gets depressed about his condition, but he remains positive by clinging to the belief that this is a journey that God wants him to take. He encourages others who may be faced with similar challenges not to give up.