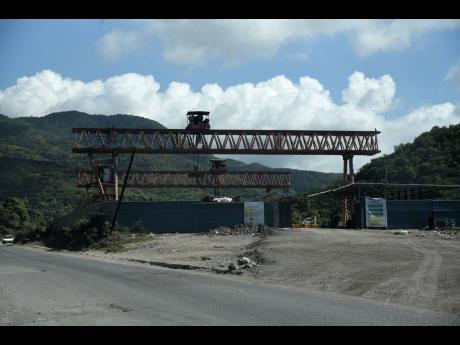 The work site where both men were found shot to death.

A relative of Dejean Campbell, who is one of the two men who were killed Tuesday night in Nine Miles, Bull Bay, said for months she had warned him not to steal material from a construction site at which they worked.

"Mi hear him with the argument inna bout September, October weh him a say a nuff eyes deh pon di site and how much the steel dem left open. Mi turn to him and say yuh only over there fi work, don't let anybody lead yuh astray," the relative said. The bodies of Campbell, 25, and Kamal Forbes, 42, were found about 8:30 Wednesday morning with several gunshot wounds. The site is being operated by the China Harbour Engineering Company. The police, according to Senior Superintendent Tomilee Chambers, head of the Kingston East Police Division, discovered 16 lengths of steel along the ground close to the deceased.

"Our investigation is ongoing but from what I have heard is that both men worked on the site for some time and they were attempting to move the steel about two or three hours after the site would have been closed for business," she said. Campbell's relative said that she was disappointed with him.

"Him never need fi do that [stealing] because him never have any child or any serious responsibilities like that. Him could a work and save up him money because a that me always tell him when mi talk to him," the relative said. A relative of Forbes said he was a quiet man who usually went to bed early.

"Him don't in need of anything. Him have him bredda a England who always send him money, plus him collect rent from tenants because a fi him house. Him no have any pickney so all a this is surprising to me," she said. THE WEEKEND STAR could not get a comment from one of the managers at the construction site.