Attacker stabbed to death with own knife 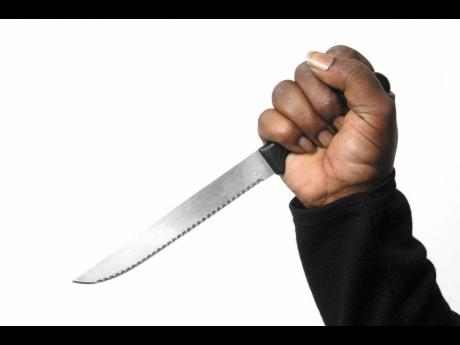 A woman who was stabbed by a man in Negril, Westmoreland, on Wednesday night, disarmed him and stabbed him to death with his own weapon.

The deceased has been identified as Tejon Jackson, otherwise called 'Sean', labourer of Whitehall, also in Negril. Reports by the Negril police are that about 9 p.m., Jackson and the woman were involved in a domestic dispute, when he allegedly used a knife to stab her in the leg. A tussle developed between the two and the woman managed to disarm him and used the knife to stab him in the chest. Jackson was rushed to the Savanna-la-Mar hospital where he died while being treated. The woman was also transported to hospital where she was treated for stab wounds and admitted under police guard.

An alleged eyewitness, a vendor, said that things could have been avoided if the deceased had listened to other persons.

"Everybody shock when wi si him attack di girl and him stab har inna har foot. Even when di girl a run, him a chase har, but shi turn pon him and dem grab up," she further stated. "A dat time shi tun round pon him an get fi disarm him, and the brute get stab wid him own knife. So dat time him did wah run but it did too late."