Busta One Foot leaving his mark on Negril seven-mile beach 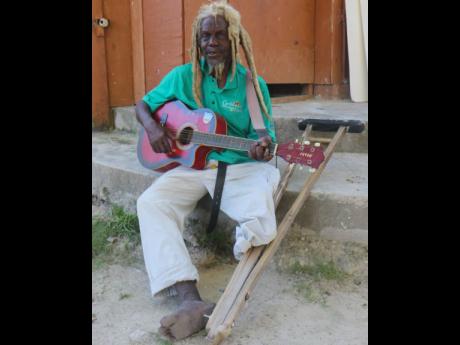 Herman Gordon, also known as ‘Busta One Foot’, performs a song at the The Boat Bar & Cottages in Negril, Westmoreland, last Friday. 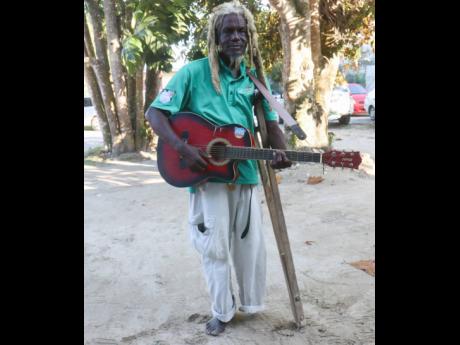 One of Herman Gordon’s legs was crushed by a train while he was a youngster growing up in Kingston. 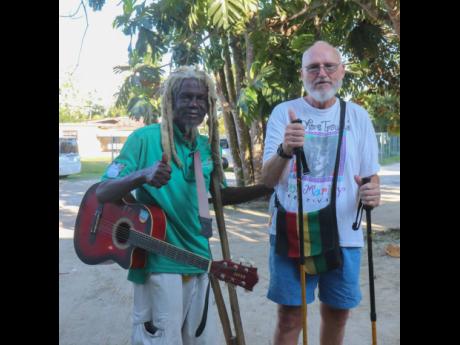 Busta One Foot shares a moment with his long-time friend, Mark Sullivan, a tourist from Boston, Massachusetts.
1
2
3

'Busta One Foot' is a popular entertainer who walks along the seven-mile beach in Negril, Westmoreland, strumming his guitar and singing for tourists.

"Music is life and I full joy to the extent up to the sky or beyond the sky. I have been doing this for about 30 years," I do songs from Bob Marley, Peter Tosh, Rickey Nelson, and even my own songs. I am also a recording artiste," Busta One Foot told THE STAR.

The 69-year-old said that he lost one of his legs when he was a child. The incident was enough to crush the spirit of people of weaker stock.

"When I was a kid, about 11 1/2 years old, I tried to hitch a ride on a train at Kingston railway. I fell from this train and luckily the wheel missed my head and catch my foot, smashed it and the doctor amputated it. I tried not make it get me down," said the man whose given name is Herman Gordon.

He fell in love with entertainment and performed as a dancer in theatres in Kingston before leaving to seek employment in the tourism sector.

"Before music, I used to dance at Ward Theatre, Queens Theatre, Regal Theatre and Carib Cinema. Oh my, if I had the opportunity to do it again it would be a great feeling, and if I could now, I would love to perform again," Gordon said.

Having left Kingston, Gordon headed for Ocho Rios, St Ann, where it became somewhat of a staple there. However, the onset of the COVID-19 pandemic meant great disruption in the tourism sector, and Busta One Foot was again on the move. He has been leaving his footprints in the sand of the world-famous seven-mile Negril beach since 2020.

"Plenty of tourists come here to see me and recognise and remember me throughout the years, and yuh know it is just the works," the Rastafarian musician said.

"People have been supportive and that is a good feeling," said the ire performer.

Among his regular patrons is Mark Sullivan, a tourist from Boston who said that the guitarist is an inspiration.

"He is one of the toughest people I know. He is a trooper," Sullivan said.

"Busta has been my friend for 20 years and now he has given me pointers on how to get around in the sand. He is a great help and a great guy," said Sullivan who has a disability that limits his ability to walk.

Busta One Foot, pleased with the strides that he has made since his near-death encounter after that ill-advised attempt to hop the train as a boy, offered some words of inspirational for aspiring entertainers.

"My advice to these youths is to let go off some of the slackness and too much of the badness. I believe music has an influence on people's lives. It has an impact on me. Just come culturally and you can make it. I can't tell them what to do, but if they could just come with some cultural lyrics, I think it would be better for today's society," Busta One Foot said.

"I have some CDs with my songs on it that I sell on the beach. People have been supportive and that is a good feeling."

The passionate entertainer said too that "I would tell people who are discouraged to never give up and keep the struggle going and you will survive. Just believe!"