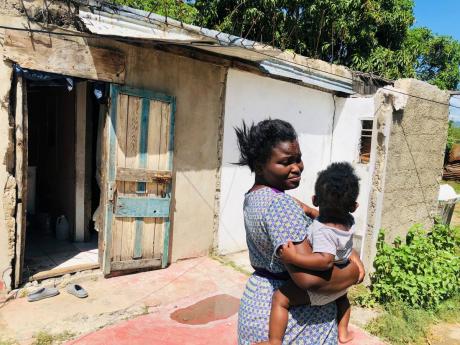 Jody Gordon with her little one outside her rundown home.

Gordon, a 22-year-old resident of March Pen Road in Spanish Town, says she fallen on the hardest of times and needs assistance to care for her nine-month-old child. Among Gordon's struggles is the home in which they live as it is collapsing around her.

"When rain fall, di whole a round yah so flood out," she said, gesturing to one of the two rooms in the small abode. Gordon says she often has no electricity and is forced to live in darkness for months on end.

Through the intervention of THE STAR team, Gordon was put in contact with the St Catherine police's community safety and security branch, from which she received counselling from Corporal Kester Fennel and Constable Romario Edwards. Even though Gordon is still in contact with her baby's father, she says he lives in a rural section of the parish and is facing hard times of his own.

"Him nuh really a gwaan wid nothing enuh, but when him make like a $5,000 him gi mi all $4,000 fi mi buy likkle things. Mi know him nuh have nothing," she said. Gordon says if she were to receive some assistance in finding a home, she could start her life properly.

"Mi nuh have nuh subject but mi wah go back a school go do nursing. If mi did just have somewhere weh never did a flood out, mi coulda put mi things dem and dem stay safe," she said.

While unable to provide material to improve her living situation, Gordon was grateful for the intervention of THE STAR and the cops.

"Mi love unuh enuh cause nobody nuh care and unuh come and unuh encourage me and me just feel like me can do it now," she said.