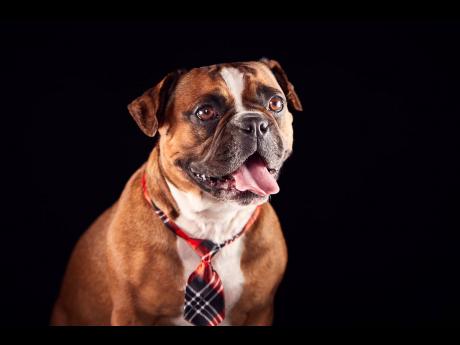 A bulldog, named Freya, gave birth to a "miracle" puppy in Canada. The dog lives with owners Trevor and Audra Mosher. It gave birth to the one green puppy among a litter of eight puppies.

Trevor and Audra were concerned that the puppy was stillborn because of its colour, but it began moving almost immediately.

Trevor told Global News: "We started to dry her off and noticed she was green and immediately again thought there was something wrong. So we googled it, 'My puppy is green, what's wrong,' and apparently it is very rare and it has happened a few times all over the world."

The green puppy has been thriving since birth and remains incredibly healthy. The green colour has been attributed to a rare and unusual process in the mother's womb.

The pooch was born surrounded by a black sac, unlike the other puppies in the litter, who were all born in translucent sacs. The colour comes from a green pigment within the sac's bile.

Trevor said that he was "amazed" to be part of such a rare event.

He said: "[I am] very lucky to have witnessed it and be a part of it."

An unused ticket to basketball star Michael Jordan's NBA debut game with the Chicago Bulls has sold at auction for US$468,000 (approximately J$72,516,834).

Heritage Auctions said the ticket to the Chicago Bulls home game against the Washington Bullets on October 26, 1984 sold for the eye-watering price.

Mike Cole, who formerly owned the ticket, said it was gifted to him by Bullets executive and family friend Jerry Sachs while he was attending Northwestern University in the 1980s. One of the tickets went unused, so it remained intact.

According to Heritage, this was the only remaining unused ticket from the game, which marked sporting icon Michel Jordan's NBA debut.

Cole is not a collector of memorabilia and admits he was stunned to see the amount that the ticket had raised.

He said: "I've never held on to these items thinking one day they're going to be worth a lot of money.

"I hold on to them because they are memories of good experiences and times spent with family and friends, and as we get older, as is in my case, it's often enjoyable to think of those times from the past."

Lottery winner thought she was a scam target

A woman dodged phone calls for days before finding out she had won $70,000 on the lottery.

The Australian woman, who has been trying to win the lottery for the past 10 years, continuously snubbed phone calls informing her that she had won the jackpot.

She had purchased the winning ticket on February 25, but confessed that she had forgotten to check whether she had won the cash prize.

The woman told UPI News: "I received some phone calls and emails straight after the draw, but I didn't recognise the phone number or email, so I didn't answer or take any notice! I said to myself, 'It's definitely a scam'.''

The unnamed women dismissed the calls for several days before deciding to check on the lottery's website.

She revealed: "I ignored the phone calls and emails for a few days, and then, eventually, I decided to log in to my online The Lott account. It all started to make sense when I discovered I'd won."

The woman has said that she's still thinking about what to do with her prize money.