Jesus loves even me - Centenarian sings praises to God Almighty 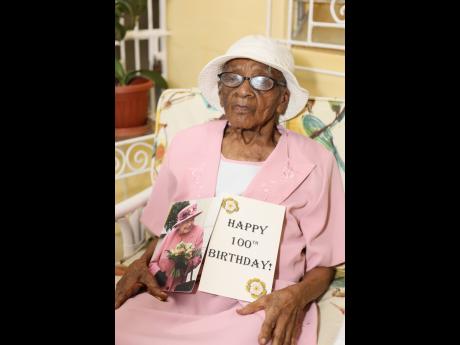 Centenarian Violet Mitchell of Chapelton Clarendon, with a birthday card that she received on her 100th birthday. 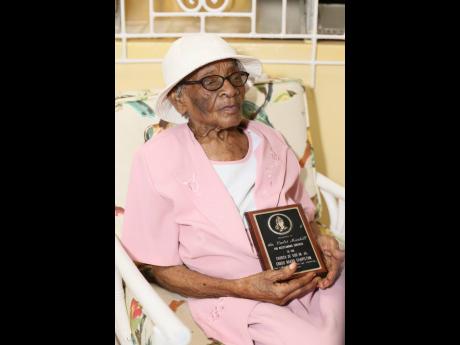 Mitchell, 101, shows off the plaque that she received from The Church of God in Jamaica for outstanding service to her church. 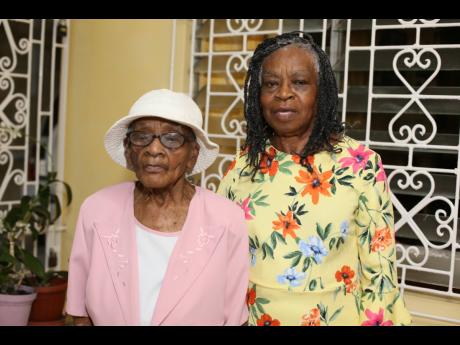 Violet Mitchell was a picture of contentment when THE STAR visited her Chapelton home in northern Clarendon last week.

Pushing back against her frailty, brought on by old age, the 101-year old Mitchell bravely attempted one of her favourite hymns, Jesus loves even me.

"I believe, as far as I see and know, attending church is very necessary. Going to church helps morally, spiritually and even financially. There is a lot of good in going to church," the centenarian said.

Minna Edwards, Mitchell's only child, said that her mother is powered by two passions - the love of children and the love of God. She served in the Church of God in Jamaica in Chapelton as a choir member, Sunday School teacher and Sunday School superintendent. She also played the organ.

Edwards, 79, said her mother was a stickler for discipline and that attending church was non-negotiable. She related an incident which happened when she was a child and thought that she would get the opportunity to stay home one Sunday.

Edwards said that her mother has a special place in her heart for children. She said that her mother was not one to sit and watch children being sidelined. She relayed an incident, which took place years ago, about a boy who was denied access to a fun day because he was not wearing any shoes. Seeing the boy in tears, Mitchell asked him what was wrong and he explained the situation.

"She took him by the hand and brought him to where they had the gathering and she said 'Sit right there', and she went for food and gave to him," Edwards said.

"I like to help other folks," said Mitchell, who was born on September 14, 1920 in Red Hills in the parish. She is the only surviving sibling of 12 children who her parents, Walter and Imogene Mitchell had. Edwards said that none of her mother's siblings reached the 100-year mark, but noted that a cousin got to 103.

Edwards said that her mother has a strict diet. She does not eat pork, chicken, eggs or canned food, but enjoys meals with salt fish and curried goat.

As an adult, Mitchell worked as a domestic helper before being trained as a secretary. She worked as assistant to a land surveyor, before moving on to the People's Cooperative Bank in Chapelton, where she worked until she retired.