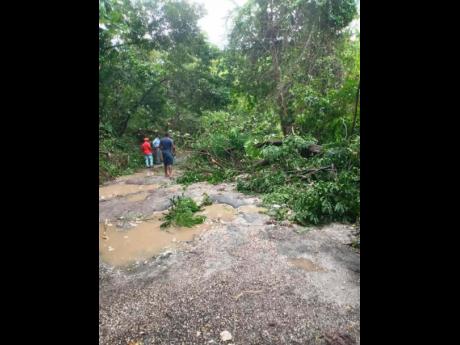 Contributed photo
Dozens of travellers were left stranded earlier today after sections of the main road leading from Boston into Port Antonio in Portland were blocked by taxi and minibus operators protesting poor road conditions.
The operators used downed trees to block the thoroughfare.
A spokesperson for group, Calvin Brown, told The Star that the situation has become unbearable as a result of the ongoing road work being done on the Portland leg of the Southern Coastal Highway Improvement Project.
Brown said the 40-kilometre stretch of roadway, which has been dug up by workmen, puts excessive wear and tear on their vehicles, which takes a toll on their pockets.
“It takes us close to two hours to drive from Port Antonio to get into Manchioneal, which previously, even with the bad roads, was like 30 minutes tops,” he said.
The protest follows last week's visit to East Portland by Opposition Leader, Mark Golding, who criticised road contractors, labelling the present road conditions as the wor st that he had ever seen.
We want to hear from you! Email us at star@gleanerjm.com and follow @thejamaicastar on Instagram and on Twitter @JamaicaStar and on Facebook: @TheJamaicaStar, or on Whatsapp @ 876-550-2506.