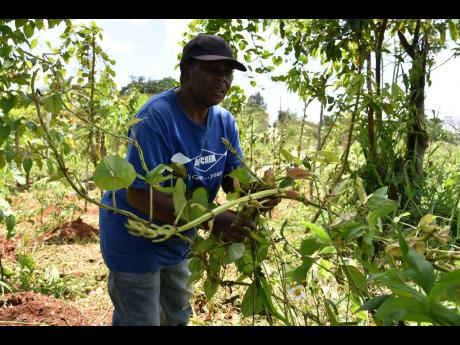 Merlyn McAnuff holds on to a yam vine on her farm in the St Andrew hills. 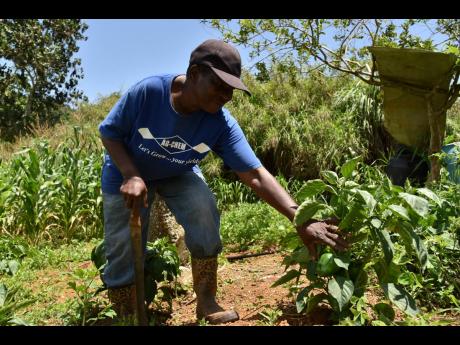 Green bell peppers are among the crops cultivated by Merlyn McAnuff on her farm. 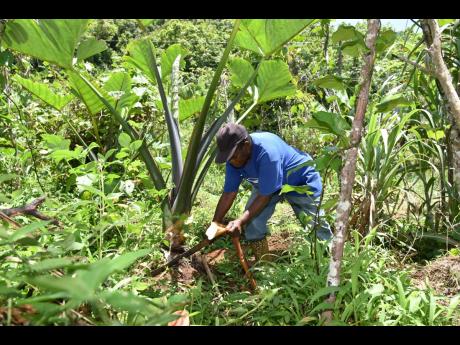 Merlyn McAnuff tends to a dasheen plant on her farm. 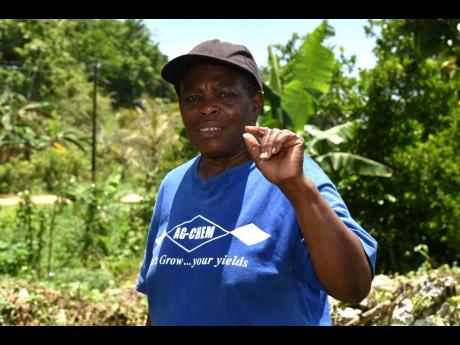 Merlyn McAnuff was recently honoured for her contribution to agriculture. 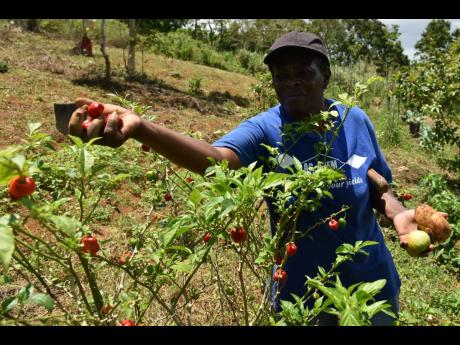 With a tomato and Irish potato in one hand, Merlyn McAnuff uses the other to pick some hot peppers.
1
2
3
4
5

An acre of land may not sound like much space, but for Merlyn McAnuff, it is enough to farm more than 10 types of crops at her home in St Andrew West Rural.

"I do everything," the 68-year-old told THE STAR. "The only thing I don't do is clear the land, and I have to pay someone to do that because I can't really manage all that."

McAnuff was among nine women in agriculture who were recently recognised at the Agriculturalist's Distinguished Women in Agriculture Awards Ceremony, for stellar contributions to the sector. She was awarded most outstanding woman farmer.

"I am grateful," she said of the award, while underscoring her devotion to agriculture.

"I don't just like it, I love farming. You see if somebody trouble you and you feel distressed, and you come a your farm, it just drive away that vexation from your heart. You just feeling good to see your farm coming up," McAnuff said.

She shared that the decision to venture into agriculture was influenced by her late husband, Vincent McAnuff. Her eyes glistened as she spoke glowingly of her partner with whom she started a farm in St Ann where they grew cabbage, yam and tomatoes. When her husband died in November 2003, two years after they wedded, she returned home to St Andrew and continued in agriculture.

"My husband encouraged me to farm. He ignited a passion in me that reminded me of my early years when I used to farm my little string bean and pak-choi. When I came back, I just picked up the farming because I decided that I don't want to work for anyone. There was a little kind lady by the name of Miss Dawn Hutchie, I asked her if I could lease her land and she just said 'go and work di land'."

And that she did.

"People may say nuh money not in it, but it is what they grow and how they tend to their things," McAnuff reasoned.

As part of her daily routine, armed with a sharp cutlass and decked in her water boots, the mother of two takes the trek from her home to her farm, about 15 minutes away, where she removes weeds or conducts checks on her produce. Wednesdays and Thursday are specifically dedicated to reaping and preparing her stock for the farmers' market, or to peddle at a market in the Corporate Area. Sometimes she finds herself preparing orders for households as well.

Her heaviest reap to date was a 15-pound Ginny yam.

McAnuff told THE STAR that the formula to her successful farm was credited to patience, faith and a little bit of fertiliser once in a while. With consistent rain and a recently installed irrigation system, she is hoping to one day grow the acreage under production and her profit margins.

The past student of Rock Hall All-Age and the St Andrew Commercial Institution, McAnuff has urged young people to get involved in farming.

"It will keep them out of trouble and keep them from scamming and tiefing people. It will take them off the road. It's not a waste of time, it is something good," the champion farmer said.