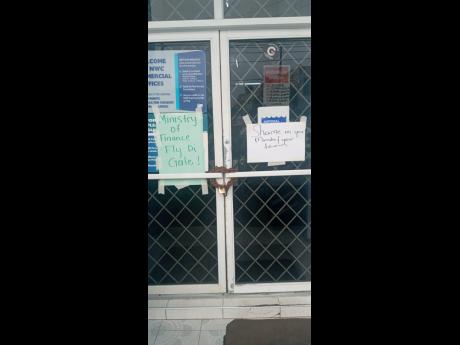 Over 2,000 workers at the National Water Commission (NWC) have reportedly gone on strike following an outstanding reclassification exercise as well as the ongoing public sector compensation review.

The impact on NWC services is not clear.

General Secretary of the Jamaica Association of Local Government Officers, Helene Davis Whyte, says it's a "total lockdown" across the island as staff from most levels, including management, are demonstrating or not turning up for work.

She says the workers are "frustrated" and almost "in despair" over the reclassification issue that has been outstanding since 2008.

In a statement to The Star in April, Finance and the Public Service Minister Dr Nigel Clarke said that the Government was embarking on an ambitious policy of restructuring of public-sector compensation.

This policy reform, according to the finance minister, will create a new compensation system that is simple, fair, consistent, transparent, efficient, fiscally sustainable and that better allows the Government to attract and retain the talent needed to run a modern bureaucracy.

Clarke said the Government is engaged in consultations with unions and bargaining groups.