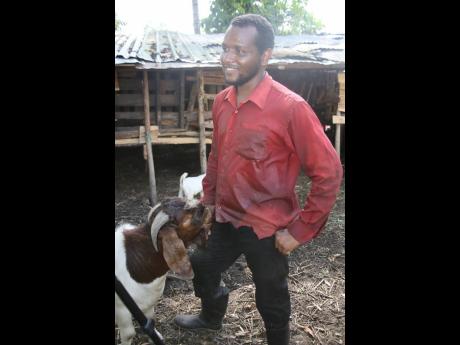 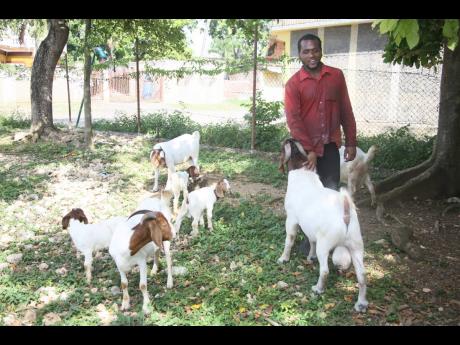 Though he admits that it is not easy, McGye gets joy from goat rearing.
1
2

McGye, who works at the Caribbean Broilers outlet in Longville Park in the parish, does his goat farming on the side and started off with a single mixed-breed goat in 2010. He has since branched off into raising Boer goats, and dreams of becoming one of Jamaica's most successful goat farmers. Sharing his journey, the 28-year-old said that after dropping out of Clarendon College, he saw an opportunity where he could earn as a goat farmer. But he did not have any experience.

"I eventually moved on to more goats, and got the experience as I went along," he shared with THE STAR.

He started out with the normal mixed-breed goats, but realised that it was a security risk, as he had to take them out for grazing. That was the beginning of his desire to raise Boer goats.

"I realised that these goats don't have to go on the road. Their body condition 'structure' differently where you don't have to feed them, like graze them out; you can use grains and hay. I really just use the grains and hay when I can get it, but I mostly just cut and carry," he explained. McGye admitted that there are several challenges to goat farming, including praedial larceny, which, he admitted, is his biggest fear. He said that he has had one mother goat stolen.

"The next five years after that I didn't lose any more but a kinda get paranoid," he shared. "That's how praedial larceny is, 'cause right now times hard and everybody desperate, and nobody willing to work." It is for that reason that he called for harsher punishment for thieves, with sentences akin to crimes like murder.

"I believe sentence should be the same, because it [is] really hard. These animals, as simple as you see them, them tek a whole heap a money a year time fi deal wid," he noted.

He also pointed out that Boer goat farmers must be aware of the tetanus disease, and must ensure that their goats are vaccinated against it, otherwise their losses can be heavy. The disease can result in stillborn kids, paralysis, and death. The young farmer said that when it comes to marketing his business and keeping it sustainable, he is fortunate to be living off the goodwill of previous customers and "word of mouth" recommendations. For those interested in goat farming, he cautioned that they should first know what they are getting into and be clear in their purpose, as some farmers rear goats for different reasons, including stud, milk or meat.

Looking ahead, McGye said his dream is to get more land space and invest in hay production, so he can assist other farmers to feed their animals. Despite his initial obstacles with secondary education, McGye has since achieved passes in six Caribbean Secondary Education Certificate subjects, including chemistry and integrated science. His dream is to attend the University of Technology, Jamaica to pursue a career in the field of food processing.