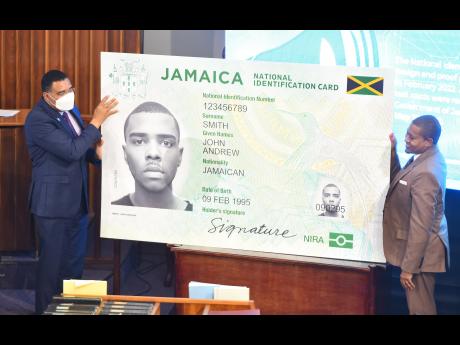 Prime Minister Andrew Holness (left), and Minister without Portfolio in the Office of the Prime Minister Floyd Green, unveil the design on the front of the country’s first National Identification (ID) card. The card, which is to be provided free of cost to citizens under the soon-to-be-rolled-out National Identification System (NIDS) was revealed during Minister Green’s contribution to the 2022/23 Sectoral Debate in the House of Representatives on Tuesday (May 24). (Contributed photo) 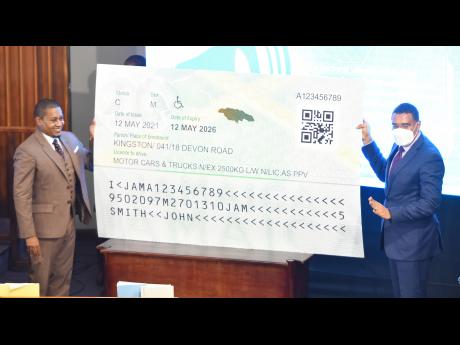 Prime Minister Andrew Holness (right), and Minister without Portfolio in the Office of the Prime Minister, Floyd Green, display the design of the rear of the country’s first National Identification (ID) card. The card, which is to be provided free of cost to citizens under the National Identification System (NIDS) project to be rolled out soon, was revealed during Minister Green’s contribution to the 2022/23 Sectoral Debate in the House of Representatives on Tuesday (May 24). (Contributed photo)
1
2

The Government has unveiled the design of Jamaica’s first National Identification (ID) card, which is engraved with national symbols and has 26 security features.

The uniquely designed card, which is a key deliverable of the National Identification System (NIDS) project intended to provide a safe, convenient, and reliable means of proving an individual’s identity, was revealed by Prime Minister Andrew Holness, and Minister without Portfolio in the Office of the Prime Minister Floyd Green.

This was done as Minister Green made his contribution to the 2022/23 Sectoral Debate in the House of Representatives on Tuesday (May 24),

He informed that the ID card design and proof print were approved in February 2022, and the first batch of test cards were received by the Government of Jamaica on May 16, 2022.

“Understanding the gravity of the task before us, the Office of the Prime Minister established a committee consisting of professionals from the Government of Jamaica, the private sector and international e-ID security experts to design Jamaica’s first National ID card,” he said.

Mr. Green informed that national symbols – Coat of Arms, the Doctor Bird, National Flag and the Ackee – are featured on the card, which will be offered to persons free of cost.

Importantly, he pointed out that a high-priority approach was taken in ensuring the security of the card, which possesses twice the number of security features of other cards, which is normally about 12.

“The National ID card is a polycarbonate card with the identity data engraved, which means that no one can physically alter the card without it being noticeable. There will be a period of sensitisation to familiarise persons with the visible level-one security features,” he said.

Mr Green informed that another important feature of the card is an optional symbol to identify persons with disabilities.

“We have met with and we have deliberated with the Jamaica Council for Persons with Disabilities (JCPD) and have agreed on using the International Access Sign to represent persons with disabilities at the rear of the National Identification Card,” he said.

He noted that with this card, the Government will not have to print a separate ID card for persons with disabilities, which will save $160 million.

He further indicated that Justices of the Peace (JP) will be represented by an identifier at the rear of the card, noting that not having to print separate cards for JPs will save the Government $7.2 million.

Minister Green, in highlighting the benefits of the card, said that it provides for ease of use and the absence of traditional written proof and eyewitnesses “to say you are who you say you are”.

“As we amend our legislation to reflect our step into the digital world, it should be noted that where we are going is to remove the need for multiple unique identifiers and moving to a space where your one National ID can be used, over time, to be your National Insurance Scheme (NIS), to be your Tax Registration Number (TRN) and where, ultimately, your National ID card can be used as proof that you are licensed to drive motor vehicles,” he said.

Minister Green noted that the National ID will be electronic, so it will give the Administration the opportunity to move more services online where persons can use the platform of the national identification system to access these services in a seamless way.

Minister Green told the House that more ways will be explored to enable NIDS to make life easier for citizens.

An Implementation Taskforce has been established to provide innovative and strategic direction for the adoption of the National ID card in the private and public sectors.

In addition, a consultant has been recruited to work with critical ministries, departments and agencies (MDAs) to fast-track the development of high-value use cases to support the use of the card, starting with the most frequent or cumbersome transactions from a user’s perspective.

NIDS, which is being implemented by the Office of the Prime Minister, is intended to provide a comprehensive and secure structure to enable the collection and storage of identity information.

This secure, voluntary tool can also verify an individual’s identity, facilitate the electronic signing of documents, and securely access a range of government services online.