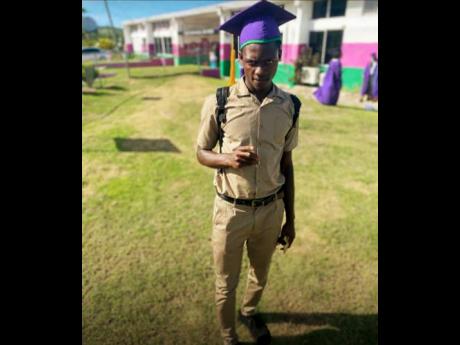 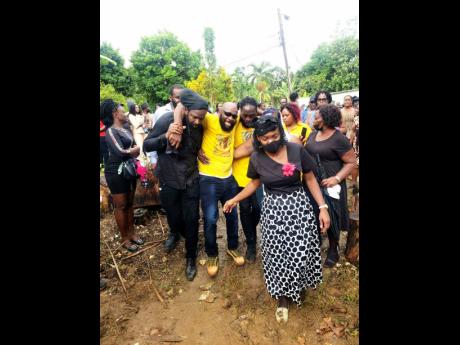 Franklin Hall (centre), father of Khamal, is inconsolable as he makes his way to the graveside. 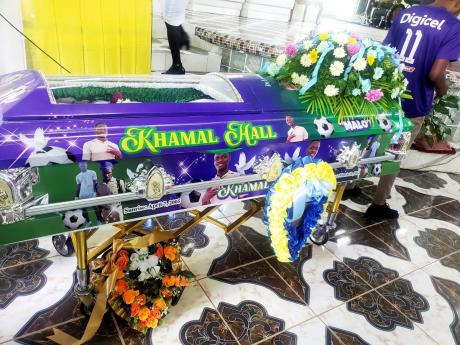 The casket bearing the remains of 16-year-old Khamal Hall who was murdered at school following a dispute over a guard ring. 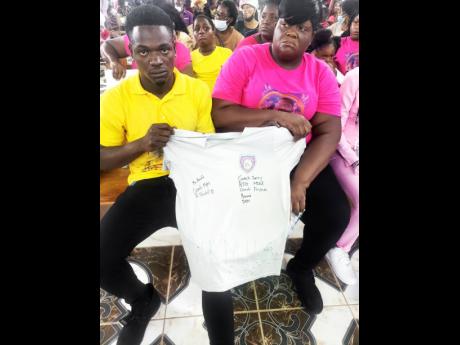 Tear-filled eyes and sombre faces conveyed the enormous sadness being experienced by Khamal Hall's loved ones as they gathered at the New Testament Church of God in Deeside, Trelawny, on Saturday to pay their last respects.

Hall, 16, was stabbed to death at his high school -- William Knibb Memorial High -- by another student following a dispute over a guard ring on March 21.

Tributes in song, poetry and heartfelt remembrances were paid to the memory of the young sports lover who did high jump, played cricket and was the goalkeeper for his school's daCosta Cup team.

"Here was a youngster with ambition of professionalism in sport, whose life has been cut short," said Dwight Jeremiah, Hall's high school football coach.

He said that Hall, despite making the team on his first attempt, worked hard and was dedicated to his training.

"Khamal was at the stage where his greatness was being unlocked," said Jeremiah, who was surrounded by members of the school's sporting teams.

Hall dreamt of following in the footsteps of his elder brother, David Swaby, who is the goalkeeper at Mount Pleasant United in the National Premier League. The young shot-stopper on Saturday had the role of consoling his mother, Natasha Roach, who was often overcome with emotions.

Khamal's father, Franklin, who was in Canada on the farm work programme at the time of the incident, found it difficult to stay on his feet.

"I cannot handle it," said the elder Hall, who asked a sergeant of police, Wayne Wallace, to read a tribute on his behalf.

"I could not read it," he told THE STAR.

The tribute read: "We reasoned like friends rather than father and son. You always promised to make me and your mom proud. You were on the way when your life was cut short. Khamal, you always wanted me to stop smoking. To honour you in death, I will never smoke again."

Wallace, is a friend of the family, beseeched the congregation to help control crime and to fight against indiscipline.

"It is a lack of discipline and refusal to follow rules which resulted in Khamal being killed. Students should not have weapons in their bags at school. If the killer had followed rules there would be no killing. Parents, teachers and fellow students, let us obey the law and prevent senseless killing," Wallace urged.

The Reverend Jonathan Hemming, chairman of the school board, said that from the reports he received, the youngster was a good student.

"His name never appeared for any indiscipline act. He was exemplary in his approach to develop his craft, and the future looked bright for him," Hemming said.

Like Wallace, he called for a united approach in the fight against indiscipline.

Bishop Ralston Thompson, who delivered the sermon, drew on an apt line from playwright William Shakespeare's play, As You Like It, to bring the issue of Khamal's untimely demise into sharp focus.

"' All the world's a stage and all men and women merely players. They have their exits and entrances and one man at his time plays many parts'," he referenced.

"Khamal has existed but he has left us with great memories. He played his many parts and we must appreciate the short time God gave him to us. Whatever the circumstances surrounding his death, we do not know, but God will reveal it. Khamal, today you finally leave us, but only in body. Your spirit will live on."