24 police stations to be equipped with electronic diaries 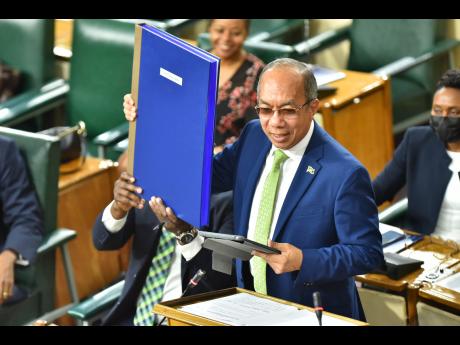 DSC 9494: Minister of National Security and Deputy Prime Minister Horace Chang, is assisted by State Minister in the Ministry Zavia Mayne (seated left), in displaying a manual station diary during his contribution to the 2022/23 Sectoral Debate in the House of Representatives on June 1. The Government is replacing these big books with an electronic records system.

Twenty-four additional police stations will be outfitted with electronic devices over the coming weeks as the Government builds out the programme to facilitate electronic recording of reports, complaints, and administrative entries by the police.

Minister of National Security and Deputy Prime Minister Dr Horace Chang, made the disclosure during his contribution to the 2022/23 sectoral debate in the House of Representatives on June 1.

The Government is implementing a station records management system for the Jamaica Constabulary Force (JCF), which will involve replacing the big books now being used at police stations across the island with an electronic records system.

The 24 police stations will be equipped under phase one of this initiative, which started in April with the Harbour View Police Station in the Kingston Eastern Division.

“This Government will ensure that we change the entire station management system. Every station has 19 of these things (big books); there is one for the prisoners… one for assets… .  All police officers learn to write in these things... that is, how you keep police records, vital legal documents.

“This Government is going to give them equipment (electronic devices), that is change and transformation,” Dr. Chang said.

Turning to the deployment of body-worn cameras, the National Security Minister said 400 cameras were deployed across 16 locations islandwide.

This financial year will see the deployment of an additional 1,000 cameras across 120 police stations islandwide.