Driver racks up 27 traffic tickets on other man’s licence 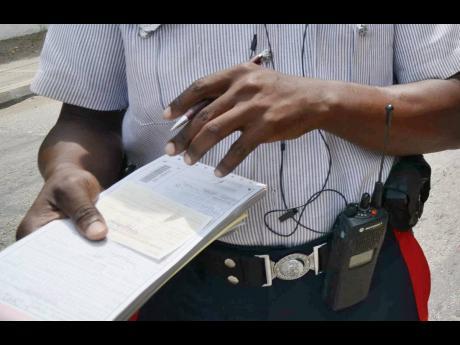 Eyebrows were raised inside the Kingston and St Andrew Parish Court yesterday after it was revealed that a Corporate Area man, Simon Smith, used another man's driver's licence for two years, racking up numerous traffic offences in the process.

Prosecutors noted that whenever Smith was stopped by the police for a traffic offence and was issued a ticket, he would pay the fine and sign using his correct name. Smith pleaded guilty to 27 counts of false pretence before Senior Parish Judge Lori-Anne Cole-Montaque. It was reported that the complainant lost his driver's licence in 2020. Smith found it and started using it. Having heard the report made against the defendant, Cole-Montaque was left baffled and asked both Smith and the complainant to remove their masks to see if there were any noticeable similarities.

"So you think you could a pass for him, unnoticed?" the judge asked Smith rhetorically. Smith is of a lighter complexion than the complainant and also has more facial hair and a moustache. It is also noted that the complainant has a more roundly shaped head while the top of Smith's head is peaked. The complainant shared with the court that since the incident, he has grown terrified of driving because he is fearful that he will be stopped and arrested by police because of the tickets that were issued for his licence while Smith was in possession of it.

"From 2020 you are driving up and down with someone else's licence, passing off as your own? And you thought that it was a brilliant plan?" the judge asked Smith.

"Yes, Your Honour," Smith muttered from the prisoner's dock. It was then revealed to the court that Smith made a living as a taxi driver. The investigating officer intervened and shared that Smith was stopped for a traffic breach and it was when the licence fell out of the car that the police noticed the inconsistencies with his identity.

"You must have been getting some sort of thrill from it, because clearly, to my mind, something like this must be discovered. What an ill-conceived plan. You're a dangerous man because you are driving around with someone else's identity. God knows what other purposes the driver's licence might have been used for," the senior judge lamented.

Cole-Montaque said that she will take into consideration what the complainant shared about his fears when it is time for Smith to be sentenced.

A fingerprint order was made and Smith was further remanded in custody until September 8. A social-enquiry report was also requested.