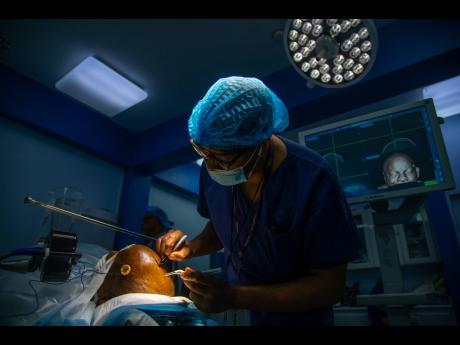 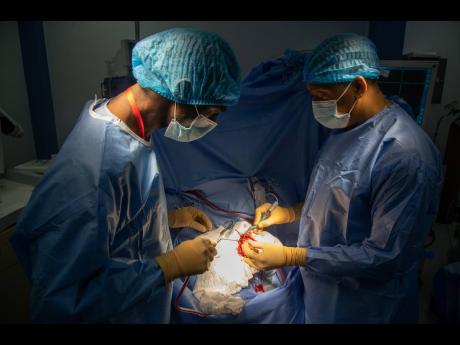 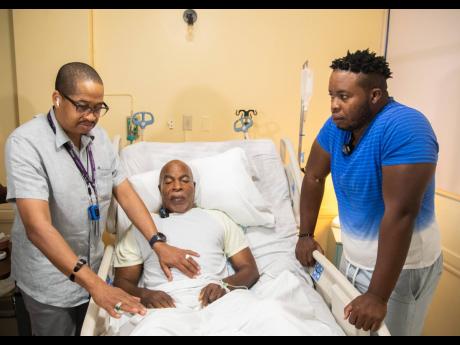 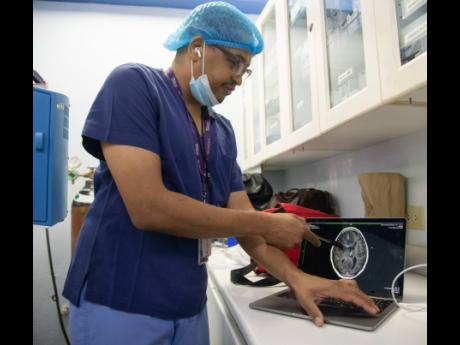 Looking at a brain scan, Hunter shows the area where the tumour is located.
1
2
3
4

Delroy Ricketts was full of life and energy carrying out his daily tasks as a butcher in Clarendon. Well that was until three months ago when he began experiencing debilitating headaches which significantly impacted his quality of life. Additionally, the usually lively man began to talk less and he lost partial motion on his left side.

The sudden and unexpected changes had his son, David, concerned. He was adamant that his father should see a doctor. The elder Ricketts made several trips to various doctors, one of whom recommended a MRI on his brain. The results left the family shocked.

The 62-year-old man had a tumour in the frontal right area of his brain, which was surgically removed last Wednesday during a procedure conducted by Dr Roger Hunter, who was assisted Dr Clement Smith. Remarkably, the eight-hour long procedure took place while Ricketts was awake. Hunter said that this is the first time an 'awake' brain surgery was being conducted in Jamaica.

It is yet to be determined whether the tumour is cancerous or benign.

Hunter, a reknowned consulting neurosurgeon who operates out of the Art of Surgery Institution in St Andrew, had advised Ricketts to undergo the awake craniotomy, which utilises electromagnetic axiem image guided technology, a service that is almost unheard of in the Caribbean.

"Yes, there's a risk of death, but if we do not do something about this tumour, that's almost certain death," Hunter told THE STAR, mere hours before successfully conducting the ground-breaking procedure last Wednesday. It took 10 hours of preparation including eight hours of the actual surgery.

"Awake brain surgeries have been around for thousands of years. ... Awake is always more superior to putting somebody under general anaesthesia. It's far more important to remove a tumour awake because when the patient is awake, you can test, you can map out areas of the brain that are sensitive. And as you remove the tumour, you are constantly interacting with the patient," said Hunter. He said the technology will give them a roadmap to the tumour ,which will reduce the need for exploratory surgeries.

Tumours located in the frontal lobe often cause behavioural and emotional changes, impaired judgment, impaired sense of smell or vision loss. Other symptoms may include paralysis on one side of the body, reduced mental abilities and memory loss.

With much life left to live, Ricketts had decided to entrust Hunter and his team with the task of removing the tumour.

"It stressful, enuh. You know mi affi just accept it, enuh. Mi nuh worry over it," he said as medical personnel readied themselves to undertake the ground-breaking procedure .

Hunter, alongside anaesthesiologist Dr Mark Sanderson and a small team, got to work with the near two-hour prep before the real work could begin.

Under the bright lights of the operating theatre, Ricketts was clearly uncomfortable. His cries of pain only became more severe when members of his surgical team began applying the first numbing agent.

"It hot!" he cried with a grimace. "Dat hot man!" Minutes later, Sanderson applied the anaesthesia and the first cut was made. Dedicated to his mission throughout the length and breath of the operation, he remained glued to his patient's side. He earlier indicated to THE STAR team that this was of the highest importance.

"My function is that although he will be awake, he will be sedated, but not sedated to the extent that he cannot respond. So my job is, essentially, to keep him comfortable so he can be tested while the operation goes on," Sanderson stated.

He explained that the level of sedation ranges from one to six, with one being very light with six being very deep.

"So I'm gonna keep him at about a three so I can easily get him to co-operate. So I'll be able to say, 'Squeeze my hand, drop your leg, do this do that', and, according to his responses, I'll be able to guide Dr Hunter whether he can continue or not," he said.

After peeling back Ricketts' forehead and drilling though a portion of his skull, Hunter finally gained access to his brain. While that was taking place, Sanderson kept calling out 'Delroy! Delroy' to ensure that Ricketts was in fact conscious. The hours passed and the movements of the surgical team went like clockwork , as instruments were passed around to Hunter in a seemingly continuous motion. Before long, the tumour was expelled, leaving a massive hole in Rickett's head. But the collective sigh of relief quickly had to be rescinded, however, as the patient became unexpectedly distressed.

"Hey guys. I need you to step out for little bit," Hunter said in a measured tone. Fifteen minutes later, the team was invited back into the operating theatre. Hunter explained what happened.

"There was brisk bleeding from tumour vessels. During the removal of the block of tumour, there was a stage where there was brisk bleeding that required surgical, microscopic control, which was effectively done within seconds. We had to clear everybody out the room and just focus," he said. From that point on, he said it was essentially smooth sailing.

The sutures being woven by Hunter's hand made quick work of the previously gaping hole in Ricketts' head. They were further secured by surgical staples.

One might think that after having a section of your brain removed, food would be the last thing on your mind. But Ricketts made it clear that he was hungry. Counting the day as a success, Hunter estimated that the tumour could weigh up to three pounds.

"It is a massive tumour to come through the brain. This is a right frontal lobotomy specimen. We hope that we have got most if not all of the tumour, but now we wait for the pathology diagnosis. This is definitely going to take a huge weight off the patient's head, so all the headaches will be much much less and we believe his quality of life will be greatly improved," he said.