ONE-MINUTE READS .... News from across the world 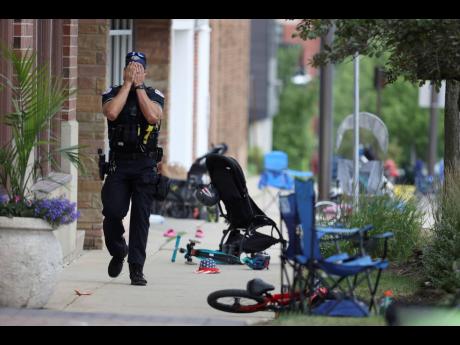 A Lake County police officer walks down Central Ave in Highland Park yesterday, after a shooter fired on the northern suburb’s Fourth of July parade. 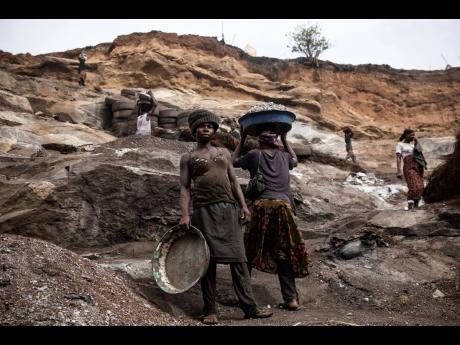 Women work in a Pissy granite mine in Ouagadougou, Burkina Faso, in April. The influx of people displaced by the country’s rapidly rising Islamic violence is causing competition among the approximately 3,000 people working at the granite mine. 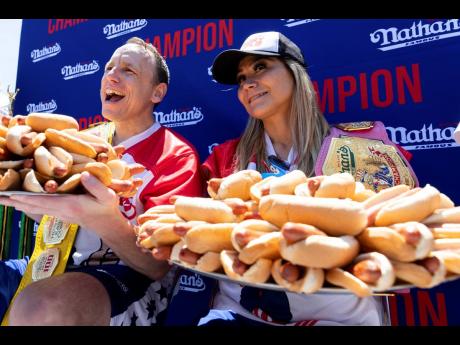 HIGHLAND PARK, Ill. (AP) -- A gunman on a rooftop opened fire on an Independence Day parade in suburban Chicago yesterday, killing at least six people, wounding at least 30 and sending hundreds of marchers, parents with strollers and children on bicycles fleeing in terror, police said.

Authorities said a 22-year-old man named as a person of interest in the shooting was taken into police custody Monday evening after an hourslong manhunt.

The July 4 shooting was just the latest to shatter the rituals of American life. Schools, churches, grocery stores and now community parades have all become killing grounds in recent months. This time, the bloodshed came as the nation tried to find cause to celebrate its founding and the bonds that still hold it together.

Mayor Nancy Rotering said the violence "has shaken us to our core," adding, "On a day that we came together to celebrate community and freedom, we are instead mourning the tragic loss of life and struggling with the terror that was brought upon us.

Attacks by jihadis killed at least 22 people in northwestern Burkina Faso and also injured others, the government said yesterday.

The "cowardly and barbaric" attack occurred late Sunday in the commune of Bourasso in Kossi province, Babo Pierre Pierre Bassinga, governor of Boucle du Mouhoun region, said in a statement.

The West African nation has been overrun by jihadi violence linked to al-Qaida and the Islamist State group in recent years. Violence has killed thousands and displaced nearly two million people from their homes.

Mutinous soldiers ousted Burkina Faso's democratically elected president in January promising to secure the country, but since then violence has increased and spread.

More than 530 violent incidents occurred between February and May, which was more than double the level during the same period of 2021, according to the Armed Conflict Location & Event Data Project.

At least 135 people were killed in 12 jihadi attacks during the first two weeks of June, according to an internal security report for aid workers seen by The Associated Press.

Frankfurter-munching phenom Joey 'Jaws' Chestnut put a protester in a chokehold while gobbling his way to a 15th win Monday at the Nathan's Famous Fourth of July hot dog eating contest, powering down 63 hot dogs and buns at the annual exhibition of excess.

In a decisive chowdown comeback, women's record-holder Miki Sudo downed 40 wieners and buns to win the women's title after skipping last year's frank fest because she was pregnant.

A spectator wearing a Darth Vader mask rushed the stage, momentarily disrupting the competition. Chestnut put the protester in a brief chokehold before contest officials hurried over and escorted the intruder away. After the altercation, Chestnut went back to the task at hand: Devouring more hot dogs.

Yesterday marked the contest's return to its traditional location outside Nathan's flagship shop in Brooklyn's Coney Island neighbourhood. The event was relocated in 2020 and last year because of the coronavirus pandemic.

Russian President Vladimir Putin yesterday declared victory in the eastern Ukrainian region of Luhansk, one day after Ukrainian forces withdrew from their last remaining bulwark of resistance in the province.

Russia's Defence Minister Sergei Shoigu reported to Putin in a televised meeting that Russian forces had taken control of Luhansk, which together with the neighbouring Donetsk province makes up Ukraine's industrial heartland of Donbas.

Shoigu told Putin that "the operation" was completed on Sunday after Russian troops overran the city of Lysychansk, the last stronghold of Ukrainian forces in Luhansk.

Putin, in turn, said that the military units "that took part in active hostilities and achieved success, victory" in Luhansk, "should rest, increase their combat capabilities."

Putin's declaration came as Russian forces tried to press their offensive deeper into eastern Ukraine after the Ukrainian military confirmed that its forces had withdrawn from Lysychansk on Sunday.

Luhansk governor Serhii Haidai said on Monday that Ukrainian forces had retreated from the city to avoid being surrounded.