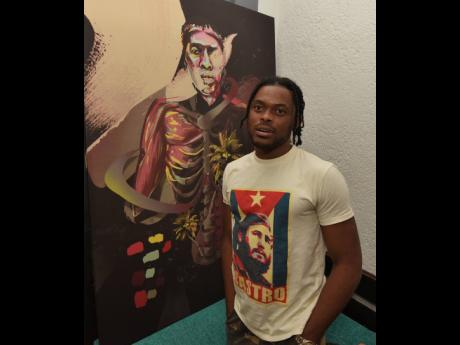 Augmented reality artist Bonito Thompson shows off one of his pieces. 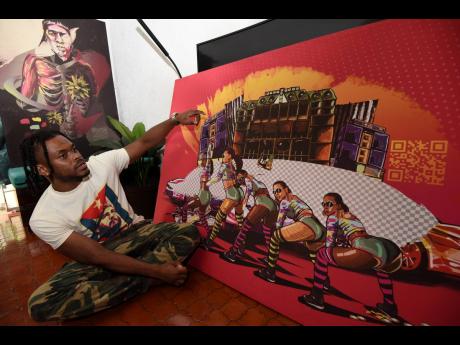 Thompson said that as a child, he was inspired by the cartoon ‘Avatar: The Last Airbender.
1
2

"Augmented reality is the future of art" is the proclamation of Bonito Thompson, one of Jamaica's forerunners of the emerging art form.

Typically, art is associated with canvases, drawing pencils and paint, but Thompson has taken a modern approach, ditching the art supplies for his computer where he creates interactive pieces through augmented reality, a technology that superimposes a computer-generated image on a user's view of the real world. For the 28-year-old, the inclination for art could be deemed innate, as his mother is a poet and his father is a painter. He recalled that he used to hurry home in the afternoons to watch the animated cartoon, Avatar: The Last Airbender.

"I grew up inside, my mother never let me go outside so I watched a lot of cable TV, a lot of Disney and Nickelodeon and I thought that Avatar was the coolest thing to exist. There was a point that I made up my mind that I was going to create something that is just as cool. That show really inspired me and from an early age I knew that art is what I am supposed to do and how I know is that from I born I'm drawing. Drawing on the walls and doors, my mother always encouraged me and I was that kid in school that people used to come to and say 'draw Dragon Ball-Z' and I draw it and they say 'Yea, dat bad'. So I always knew that art was my thing," Thompson related, in between laughter.

After completing secondary education at Jamaica College, the Riverview, St Andrew, native enrolled at the Edna Manley College of the Visual and Performing Arts in 2012 to pursue a degree in graphic design and illustration.

"Again because of Avatar, I wanted to make graphics and animation. I was focused on getting to that point. At the time, Edna never had animation, it's only now that people, over the past few years, are taking those types of art serious," he said.

It took at least seven years for Thompson to create what he wanted. Adopting the moniker, DonDada, his artwork tells story of Jamaican culture, incorporating a story-telling aspect, and is his way of creating a niche for himself. His first piece, 'Bike Back', was done in 2019. It came to life while he watched a music video by RDX.

"I wanted to find new ways for persons to interact with my art and I wanted to give this illusion or concept of movement. I want when people look at my artwork, they have to pause and take it in. I was watching a video and the dancer, Dolly Body, was dancing with a guy on a bike back and I just made it into art. There is a knowing when you're an artist and when I was making this, I was just making it because it feels right," Thompson shared.

When THE STAR visited his studios, only a laptop and his drawing book indicated his workspace. In producing the pieces, he uses three applications where the artwork is designed digitally then printed on to a canvas. Eager to transform the art space, focusing on dancehall culture, he urges like-minded artists to be unapologetic in creating modern art.

"One beautiful thing about life is that momentum will carry you once you put in the work. Literally, just start with your ideas, whatever it is, start with it and start building it out and show that to the world and continue to do it. So whether people like it or not, keep doing it because the more consistent you are with doing it and doing your work and being true to your creative energy, over time it will build this magnetic energy around you and people will start to show up," Thompson encouraged.