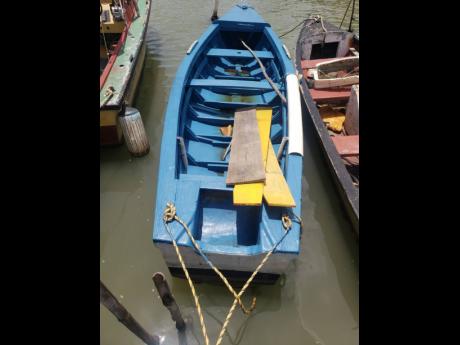 Boats docked at Rock in Trelawny. 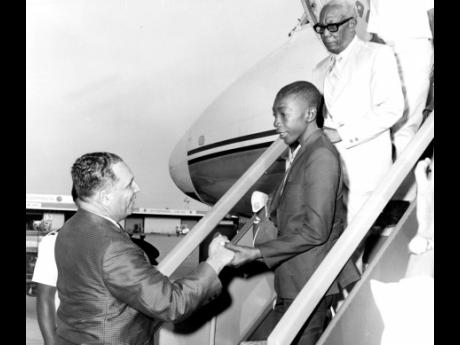 Jason Whyte (centre) being welcomed back to Jamaica by Allan Douglas, minister of youth and community development, at the Palisadoes Airport. Oscar Savage, Jamaican consul in Panama, who accompanied Jason on a TACA flight from Panama, is behind him. 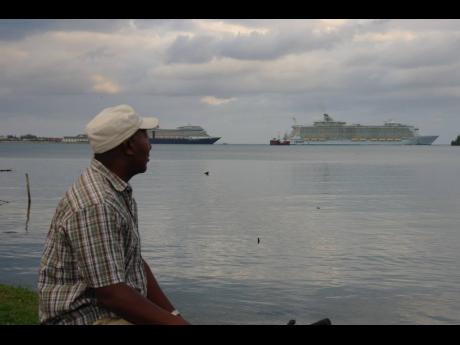 Despite being lost at sea as a youngster, Jason still loves the sea.
1
2
3

When The Gleaner recently republished the ordeal of a teenage boy who was lost at sea for 17 days, it brought back memories of a sad chapter in the lives of residents of Rock, a small fishing community on the outskirts of Falmouth in Trelawny.

The boy, Jason Whyte -- 14 years old at the time -- had gone on a fishing trip with his father on the afternoon of May 29, which ended in the worst possible way.

Their boat, What's That To You, developed mechanical problems and began drifting away from Jamaica. During this time, the elder Whyte complained of chest pains and decided to lie down in the boat. He never got up again. By June 1, three days after leaving Rock, Jason who was keeping a close watch on his father, saw no sign of life in him. His skin was peeling off and he was unresponsive, and so Jason decided he was dead and threw his body overboard.

The boat drifted for the next 14 days before he was rescued by a passing ship which took him to Panama.

Now 65, and living in Canada, Jason told THE WEEKEND STAR that "I don't want to relive the experience, but we can talk about pleasant things." He, however, directed the news team to his 81-year-old sister, Thelma Whyte-Vickers, who said she remembers the incident as if it were yesterday. She said that on the fateful day, her father, who was known in Rock as 'Seaside Lawyer' was his usual jovial self when she saw him at Bata Piazza in Falmouth.

She recalled him shouting out to her asking, "Gal, yuh going up (Rock) now?" She answered the question in the affirmative and he instructed her to 'tell di bwoy (Jason) to carry down di boat'. That was the last conversation she had with him.

"They left telling other fishermen that they were going to Big Cliff to fish. Half-way there the boat ran into trouble and they decided to return to shore. They never made it," Thelma said, shaking her head.

With William and Jason not returning as expected, other Rock fishermen set sail for Big Cliff. There was no sighting of them. The Jamaica Defence Force Air Wing also joined the search without success.

"For 17 days and nights my mother and sisters cried," Whyte-Vickers said. "Some of us bawled and other residents of Rock gathered in the yard with concerned looks on their faces."

Unknown to the Whytes and residents of Rock, Jason had survived the elements but his father was not returning home. Whyte-Vickers said they got the first clue on June 14 after hearing the midday radio newscast.

"We heard that Jason was found close to Panama. There was no mention of our father," she said. "Mi jump off di verandah, clapping mi han dem, while shouting 'thank yuh, Jesus'. Before mi coulda count to three, the yard full up a people. Happy fi Jason, but sad fi Papa," she said.

Jason shared his 17-day ordeal with Oscar Savage, the Jamaican Consul in Panama, who got him back to the island. When he got home he told his family members of the encounter he would rather forget. Recalling that conversation that took place 51 years ago was too much for Whyte-Vickers. "Mi nuh want talk bout it," she said as she was overcome by sadness.

Jason, meanwhile, in the telephone chat with THE WEEKEND STAR, said that though he told Savage that he would not go back to sea, "months after I was out fishing again".

"It is in my blood. My mother and sisters, all of us do some form of fishing," he said.

"I live miles away from the sea. However, from time to time I go river-fishing. I go back to Rock every year. Before I arrive I make plans with Herbie and Ned to go fishing. Last time I was there I caught all kinds of fish, including a big bonito, which I cleaned up, freeze and take back to Windsor so my friends can experience the difference in the taste of sea fish, when compared to river fish," said Jason, who plans to visit Jamaica in December.