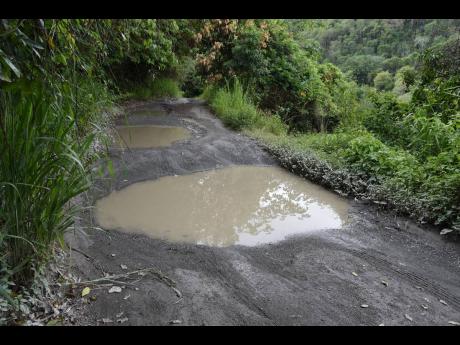 A section of the Hagley Gap to Ness Castle road in St Thomas. 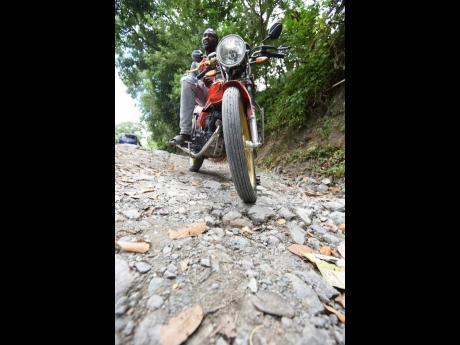 Bike taxi operator Delroy Edwards, who plies the Hagley Gap to Mount Charles route, takes his time to navigate along the rocky roadway.
1
2

To say the roads through Hagley Gap and a few surrounding communities in St Thomas are not smooth would be an understatement.

The only motorists who are brave enough to tackle the unpaved and broken roads are the bike taxi operators, but they too are finding it extremely challenging. It costs at least $800 for a round trip from Hagley Gap to Mount Charles, but Delroy Edwards said that's the lowest they can charge.

"Almost every week we have to change parts off di bike. Two week never pass and we nuh change parts and all a that have to do with the bad road dem. A years the place stay so. We know it nah go tar and dem ting dem enuh, but we would want the government just smooth it down fi we because the road a chop up we tyre and none a the back tyre dem nuh cost less than $9000. About nine years now taxi nuh run regularly on this route," he said, his colleagues nodding in agreement.

"Mi have some contract where mi carry school pickney daily and now that school out, mi carry the adult. It really rough fi some people because the gas price keep going up and all these things. Anuh everybody a go can afford. Each school pickney pay $300 so it rough pon parents. So mi know it hard when you have to find lunch money plus $600 for a round trip for them," Edwards said. "[But] That's the best price we can offer. Yuh have car man who buy gas in Yallahs for us and yuh done know dem a go sell it back at their price suh it just rough all over."

Edwards, who resides in Hagley Gap, said that he has become accustomed to the bad roads, but longs to see a massive improvement to the infrastructure of the farming community.

"Mi use to walk from right here so go Cedar Valley from 2008 to 2013 to stand up outside Cedar Valley Police Station to wait on a taxi. A Seaforth High School mi use to go so we would have to start walk from 4 o'clock in the morning. It did really rough man. All mi ask is that them just smooth down the road for us. It rough on the economy and we understand that, but we can't operate in this condition," Edwards said.