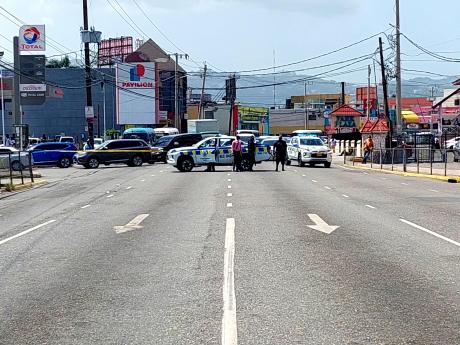 A man of unsound mind was shot dead by a police officer following a confrontation in Half-Way-Tree, St Andrew this afternoon.

An identity for the deceased has not been established.

According to reports, the mentally ill man attacked persons in the transport centre in Half-Way-Tree with stones and other sharp objects.

Security guards working inside the centre were alerted but they were unable to contain the threat. The police were subsequently summoned and during another alleged attack, the man was shot twice in the abdomen.

"He was hurling missiles, stones and waving a machete causing a threat in the transportation centre. The security guards couldn't manage it so they called the police. He attacked the police several times and they took cover. But he advanced on one of them with some stones and such, and when the police realised that he was right over him he had to fire a shot. He was taken and rushed to a hospital," said Senior Superintendent Marlon Nesbeth, the head of the St Andrew Central Police Division.

There has been a pile-up of traffic in Half-Way-Tree as motorists are rerouted because of the incident.