$2-million worth of phones recovered from Dream Weekend heist 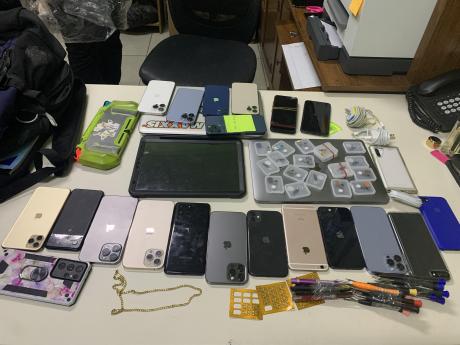 The police have confirmed that more than $2 million worth of gadgets allegedly stolen from patrons of the Dream Weekend party series in Westmoreland were recovered on July 31.

The event started on Friday and will end Monday.

Approximately J$200,000 in cash, along with 30 British Pounds was also seized.

Three men are in custody while the hunt is on for two others.

Personnel from the Negril Resorts Area Police conducted the operation.

Among the items were 16 Iphones, two Samsung Galaxy phones, two laptops, and 36 R-Sims which are used to unlock phones.

“This is the first time I have seen such a large haul for a couple of days at the events. In previous years you would have one or two phones and maybe break-in of cars would take place. I must commend the officers for doing such a remarkable job,” Sealy said.

Andrew Coombs, whose Iphone 13 Pro Max was stolen, described the situation as a nightmare.

"These men left their homes to rob people of having a good time. It is sad because people spent their money to enjoy themselves especially after the pandemic,” he said.