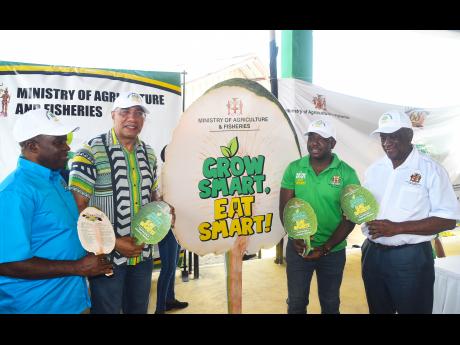 The launch brought the curtains down on the three-day agricultural showcase held from July 30 to August 1 at the Denbigh Showground, Clarendon.

Prime Minister Holness, who visited the agricultural show on the final day, emphasised that a strong agriculture and fisheries base is essential in asserting Jamaica’s independence as a small island state.

In officially launching the campaign, the Prime Minister said “food freedom” is a critical declaration of Jamaica’s Independence.

“Freedom is that you have options…Freedom means that if something happens, you can recover quickly and you are not beholden. If we are talking about being truly free, our agriculture, our food security is a part of that true freedom,” Mr. Holness said.

The Grow Smart, Eat Smart initiative will target several priority areas, among them crop production, climate-smart practises and technologies, access to finance, and a focus on praedial larceny.

It will also facilitate development of a National Farming Trust and expansion of fisherfolk and farmers insurance.

While there has been some investment in the sector by business interests, Prime Minister Holness noted, more is needed to bring about significant improvement in agricultural practises, increased output, and greater resilience of the sector.

“I am happy to say that I am seeing emerging now, businesspeople taking risks and making capital investments in agriculture… .  If we are going to look now to have massive increase in your agricultural output, we need to bring in more capital, bring in larger holdings… bring in enterprise and managerial resources, so that we can have that big push towards increase,” he urged.

He congratulated the Denbigh Show organisers for the successful staging of one of the country’s flagship Emancipation/Independence celebration events, following a two-year hiatus caused by the COVID-19 pandemic.

Several key partners and stakeholders, among them Deputy Prime Minister, Dr Horace Chang; Minister of Agriculture and Fisheries, Pearnel Charles Jr.; the delegation from the Government of Cayman, and Ambassador of Japan to Jamaica, His Excellency Masaya Fujiwara, attended the event.