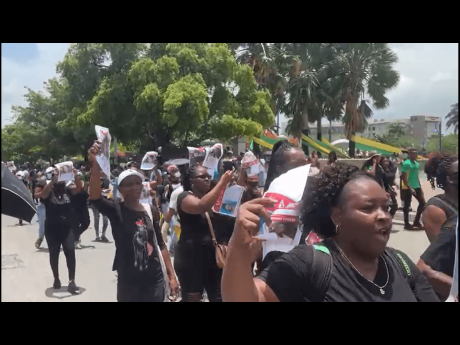 Supporters of missing social media personality Donna-Lee Donaldson took the streets again this morning in protest, declaring they will not stop until Constable Noel Maitland is convicted for her murder.

The police yesterday charged Maitland with murder however Donaldson’s body has not been located.

The protesters gathered at the Kingston and St Andrew Parish church then stood across from the Half Way Tree police station handing out flyers and chanting ‘Justice for Donna-Lee”.

Hinds said this is not the end because Constable Maitland was charged Tuesday.

The police said they have charged Maitland to the murder based on circumstantial evidence.

Neil Lugg, Donaldson’s uncle who was present at the protest this morning said the family want a body.

“If is even her bone”, Lugg shouted from a public address system.

Maitland, who is Donaldson's boyfriend, was arrested July 27 on Duke Street in Kingston.

Donaldson, who was last seen in the company of Constable Maitland was reported missing by her mother Sophia Lugg on July 13.

Donaldson was last seen alive by her family on July 11 when Maitland picked her up from her home.

She was reportedly taken to his apartment on Chelsea Avenue in St Andrew.

Yesterday during the press conference DCP Bailey said, “We believe Miss Donaldson was killed Tuesday the 12 of July… between the hours of 4pm and 8pm.”

The police said they have searched the Riverton city dump, however her body has not been located.