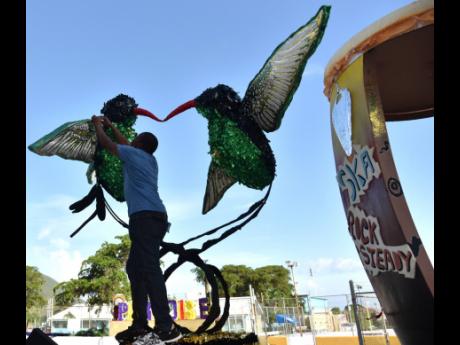 Artist Jerome Marshall applies finishing touches to one of the four floats that was used in the Emancipation Day parade on Monday.

Red Stripe, the official beer of Jamaica 60, said it will be commissioning a series of murals that celebrate the pride of the people.

The painting of the murals will be done by local artists who will capture the Jamaican vibe and energy. It is part of a national initiative between the beer producers and the Ministry of Culture, Gender, Entertainment and Sport in observation of the country's 60th year of independence.

"As we reflect on our journey as a nation and chart our course for the future, projects like the one we're undertaking with Red Stripe are important to achieving the progress we want to achieve. We are excited to have Red Stripe on board as the official beer as we celebrate Jamaica's Diamond Jubilee," portfolio minister Olivia Grange said.

For his part, Red Stripe's head of commercial, Sean Wallace, said that the company is committed to aiding national development.

"Throughout our 104-year history, we have remained at the epicentre of all things Jamaican. Whether it's sports, music, culture or actively supporting community-based programmes, Red Stripe has been a leading corporate citizen. Our iconic beer is synonymous with Jamaica. When you think of authentic Jamaican culture and experiences, a cold Red Stripe beer is always present, so we had to show up in a big way for Jamaica's grand 60th celebration," he said.

The beer company will mark the milestone of Jamaica's Diamond Jubilee with the release of a limited-edition commemorative Jamaica 60 packaging for Red Stripe six-packs.