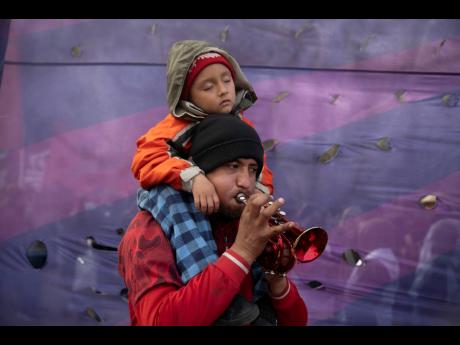 A child falls asleep as his father plays a pocket trumpet during a demonstration demanding more money for social programmes that support unemployed people, in Buenos Aires, Argentina, yesterday.

TikTok is No. 1 social app

TikTok is the most popular social app US teenagers use, according to a new report published yesterday by the Pew Research Centre.

The Washington-based think tank found that 67 per cent said they use the Chinese-owned, video-sharing platform.

Instagram, which is owned by Facebook parent Meta, is the second most popular app with teens, Pew found, with 62 per cent saying they use it, followed by Snapchat with 59 per cent.

Not surprisingly, only 32 per cent of teens reported ever having used Facebook, down from 71 per cent in 2014 and 2015, according to the report.

Russian authorities on Wednesday detained a former state TV journalist who quit after making an on-air protest against Moscow's war in Ukraine, and charged her with spreading false information about Russia's armed forces, her lawyer said on social media.

Marina Ovsyannikova was charged over a protest she staged last month, holding a banner that said "(Russian President Vladimir) Putin is a killer, his soldiers are fascists. 352 children have been killed (in Ukraine). How many more children should die for you to stop?"

If tried and convicted, Ovsyannikova faces up to 10 years in prison under a new law that penalises statements against the military and that was enacted shortly after Russian troops moved into Ukraine, lawyer Dmitry Zakhvatov said in a Telegram post.

At least 15 soldiers were killed in northern Burkina Faso when their vehicles hit landmines, including a rescue team that hit a second explosive device when they were rushing to help, the army said.

The explosions took place in the Bam area of the centre-north region, the army said in a statement issued late on Tuesday. The first vehicle hit a roadside bomb near the town of Namsiguia, it said. When the rescue team responded, a second device exploded.

"The results of the two incidents show 15 fallen soldiers and one injured. Material damage was also recorded," said the army statement.

No group has yet taken responsibility for the attack, and investigations are under way, the army said.

British health authorities said they will offer a polio booster dose to children age one to nine in London, after finding evidence the virus has been spreading in multiple regions of the capital, despite not confirming any cases of the paralytic disease in people.

In a statement on Wednesday, Britain's Health Security Agency said it had detected polio viruses derived from the oral polio vaccine in sewage water from eight boroughs of London, but had not identified any cases.

Its analysis of the virus samples suggested "transmission has gone beyond a close network of a few individuals", but that it had not found anyone infected with the virus. According to the World Health Organization (WHO), only one in 200 polio infections leads to paralysis; most people don't show any symptoms.

"This will ensure a high level of protection from paralysis and help reduce further spread," the agency said.

The agency said it was working closely with health authorities in the US and Israel as well as the WHO to investigate the links between polio viruses detected in those two countries.