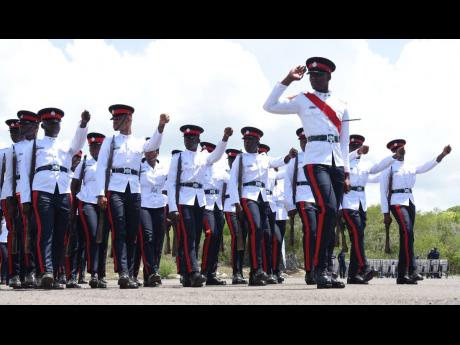 Newly minted police officers from Batch 136 march during their Passing Out Parade at the National Police College of Jamaica, Twickenham Park, St Catherine on Thursday. 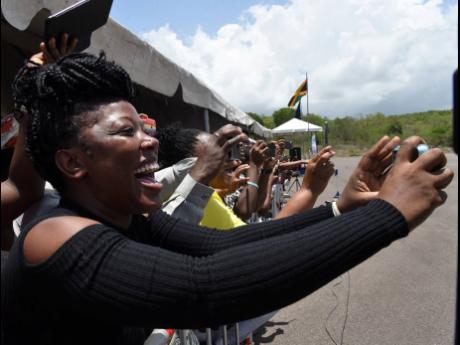 Friends and relatives of the 120 constables cheer them on during the graduation ceremony.
1
2

The latest cohort of police personnel to join the ranks of the Jamaica Constabulary Force (JCF) has been reminded of their duty to serve with professionalism.

Dr Horace Chang, the minister of national security, told the freshly minted cops that he was confident that they will "contribute positively to the work of law enforcement".

He told them that "In order to carry out your duties effectively, you must be unbiased, impartial and accountable for your actions at all times".

Chang made the remarks on Thursday at the Passing Out Parade, Certificate and Award Ceremony for 120 police officers at the National Police College of Jamaica, Twickenham Park, St Catherine.

"You have benefitted from training in a modern philosophy of policing that is relevant to our Jamaican context. This means that you are equipped with most, if not all, of the modern requirements of policing," he said.

The new graduates received training in areas such as gender-based violence and general rights-based approaches to policing.

Chang noted that in addition to the modern philosophies that have been imparted, they have also received training to "engage appropriately with heavily-armed, resourced and brutal criminals who will kill".

"Trust your training," he advised them. "You have been well trained."

This cadre of police personnel will add numbers to the establishment, which currently stands at above 12,000 for the first time in the more than the 150-year existence of the JCF.