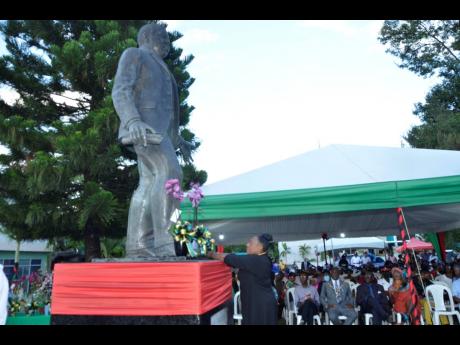 Minister of Culture, Gender, Entertainment and Sport, Olivia Grange, lays a floral tribute at the life-sized statue of National Hero Marcus Garvey, during a civic ceremony to mark the 135th anniversary of his birth, held at Lawrence Park, St Ann’s Bay, St Ann, on Wednesday. 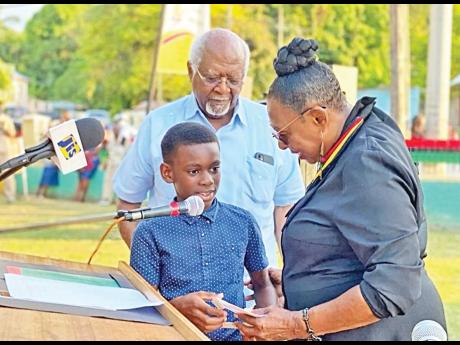 Construction of a museum to honour and memorialise Jamaica's first National Hero, Marcus Mosiah Garvey, will be finished during the country's 60th year of Independence.

This according to Minister of Culture, Gender, Entertainment and Sport, Olivia Grange. She said that the facility, which is being erected at 32 Marcus Garvey Way in St Ann's Bay, St Ann, where Garvey spent his formative years, is near completion.

"I am heartened that ... the Garvey museum, conceptualised in 2011 for Jamaica 50, and re-engineered during Jamaica 55, is about to become a reality within the legacy of Jamaica 60," Grange said. "I am proud to say that our efforts to establish a museum in Marcus Garvey's honour on the site of his boyhood home is almost a reality."

The minister was speaking at a civic ceremony to mark the 135th anniversary of the birth of Garvey and his 58th year as a national hero, held at Lawrence Park, St Ann's Bay, on Wednesday. Grange said that the legacy of Garvey will be protected through the establishment of the museum, noting that it will capture all aspects of his life.

"The museum will be a place where every child and adult of Jamaican heritage, local and foreign-based, will be able to enter physically and virtually to proudly do research, to know the great man Garvey was, and leave more conscious of their ancestral pedigree and heritage, " she said.

She noted that the space will be reminiscent of Garvey's focus on cultural enterprise and achievements as well as "one that constantly reminds us of our capacity for greatness, every one of us". Grange informed that three houses are being constructed on the Seville Heritage Park property in St Ann to relocate the family that occupied the house where the museum is being established. Two of the houses have already been completed.

Grange said that the two-bedroom units, which were constructed under the New Social Housing Programme, will be handed over by Prime Minister Andrew Holness in short order.

For his part, Dr Julius Garvey, the late hero's son, urged Jamaicans to look to his father and other heroes who paved the way for the nation to achieve Independence, "for an understanding of the way in which we should go" to attain greatness.

"Marcus Garvey has set us an example in terms of his ideals but also in terms of his organisational ability, his confidence in self and his ability to triumph over obstacles," he said.

The civic ceremony, hosted by the St Ann Municipal Corporation, included the laying of floral tributes at the life-sized statue of Garvey which is erected at the entrance of the St Ann's Bay Parish Library on the Lawrence Park grounds.

Flowers were placed by Grange; Garvey; Mayor of St Ann's Bay, Councillor Sydney Stewart, and other political representatives from the parish.