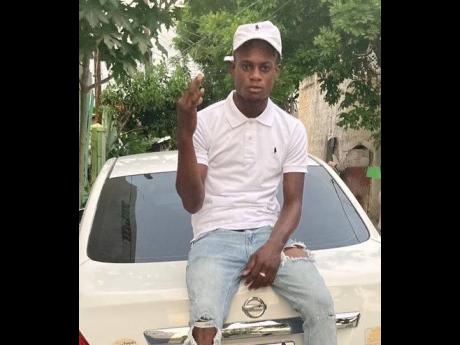 Last Friday when Donna Falconer experienced a gut-wrenching sensation, she immediately felt that something bad had happened but she could not quite identify what it was. Unknown to her, the life of Shamar Stewart, her 21-year-old son, was being extinguished a few miles away from their home on Wild Street in Kingston.

"I was talking to a friend out by the park bench and I wasn't sitting down, I was standing up, and me hear my niece shout me. And the one shout she shout me, me feel a whopping pain, and a I say, 'Yes, Lord, what is this now'. I fainted before I get the news. I had a sense that something was missing, but I couldn't place it," Falconer told THE STAR.

According to the police, Stewart was shot and killed during a confrontation with lawmen about 4:15 p.m. on Marcus Garvey Drive. One .38 revolver containing three .38 cartridges was reportedly seized.

Stewart's brother, Tiumion, has dismissed the police account of the incident. He is convinced that his brother was executed.

"That is an execution. No one was shot, no one was hurt, I can't see no report from the police to say anything, no vehicle was damaged. How the officers were shooting, they could not say that he was a threat to them. The police dem weh kill my brother never had to do it," Tiumion said.

The matter is being investigated by the police's Inspectorate and Professional Standards Oversight Bureau (IPROB) and the Independent Commission of Investigations (INDECOM).

A video of what is believed to be the shooting incident shows a man in a blue shirt with an identification card hanging around his neck firing several shots in a culvert.

Tiumion is adamant that he will not rest until he gets justice for his slain brother.

"My banner will wave high and me nah rest, if me affi make a video, me will make the video. I want INDECOM to look at the video because the justification that the police are saying that it was a shoot-out, there was no way that could be a shoot-out. They need to check and realise that they cannot go around and kill people so. They are employed to serve and protect," Tiumion told THE STAR.

The distraught brother described the relationship with Shamar as tightly knit. He recalled their last conversation was them making plans to assist with opening a cookshop for their mother as well as having Shamar migrate to the United States to work alongside him in his auto-repair shop.

"Me cherish my bredda," Tiumion said. "Me always tell him say me love him. My brother nuh selfish, him loving bad. There is nothing in me weh tell me seh me bredda dead. Friday me deh yah a wait pon him fi call me so me can send the money fi him cookout, and is a next call me get fi tell me seh summen gwan," added Tiumion, the pain evident in his voice.

Yesterday, their mother stared blankly as she struggled to accept the fact that Shamar has died. She said that they had plans to open a restaurant in November. Shamar was getting ready to host a cook-out that he dubbed 'Di Ting Mad' on Saturday.

"It keep same way, and the whole lane ram. It was a good turnout. We did affi keep it same way, even though we sad, because him woulda want it dat way," one resident told THE STAR.